Dealing With A Negative Mental Attitude


Negativity Is A State Of Mind Best Not Trifled With

A negative mental attitude, akin to lack of cooperation, is a leading cause of chaos. If not treated, and dealt, with knowledgeable respect, this enemy of Human Progress, and personal happiness, will drag one to the bottom.

Dealing with negativity is definitely one element of Life where Ignorance is not bliss. 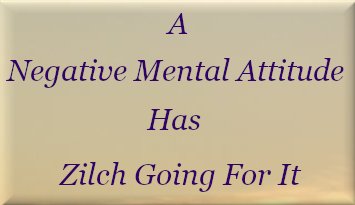 Before we begin to deal with a negative mental attitude, the distinction must be made between evil purpose and negative Thought.

As similar as they may appear - both wallow in the repulsive mire of chaos - negative Thought shouldn't be confused with evil intention. These two are not the same. Although one can lead to the other, and frequently does.

However paradoxical it may sound - in the exact manner required with Good minds and Good intentions - evil minds must believe they can achieve their parasitic goals.

We are dealing with the accumulated beliefs of an individual, and how these beliefs underpin one’s actions, or as is often the case with a negative individual, inaction. The same principles apply whether one has Good or evil intentions.

Whether our intentions are Good or evil, the consequences of negative Thought are identical.

Indulging in persistent negative Thought will inevitably lead to Hebetude, a pathetic condition characterized by mental lethargy and dullness.

Persistent Hebetude inevitably leads to a negative Personality. Verily, a negative Attitude has zilch going for it.

Whilst appreciating the Truth of Napoleon Hill's astute observation, it is worth considering the possibility that a Human Being, although inclined towards negativity, can arrest, reverse, and transform, a negative approach to Life, into a Positive Mental Attitude. Thenceforth a Positive State of Mind.

This intellectually difficult course of action is initiated by an individual choosing to change his or her Mind. Otherwise known as an Attitude Change.

To be truly effective, and accomplish the end goal of a Positive State Of Mind - with confident ease - a Mind Change must be steeped in knowledge and comprehension of Natural Law and Human Nature.

The Content of pdThinker.com offers a wealth of information to facilitate that same confident ease that allows Human Beings to reach the highly desirable state of Self Reliance.

The first step in banishing a negative mental attitude is to recognize it as such. Often, this gloomy state of internal affairs is adopted indeliberately. A sense of total helplessness can be self imposed upon a susceptible Mind by the very environment that Mind exists in.

Much can be done. 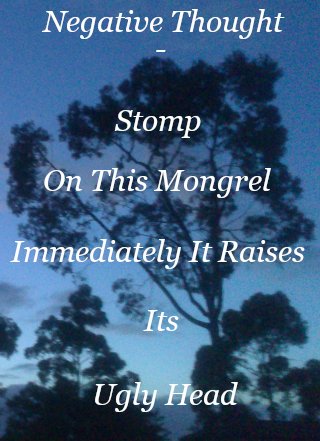 Challenging the unhealthy influence on one's Thinking of an endless stream of pessimistic Broadcasts, is an excellent place to start.

Allowing oneself to be influenced by perverse opinion from any source, not only nourishes and reinforces a sense of helplessness it eliminates the contingency of one’s mind becoming Positive.

A Purposely Positive, Developing Mind, possesses the power to entertain opposing Thoughts. Whether they be positive, negative, or both, at the same time, for evaluation.

This useful phenomenon extends itself to holding two, and more, ideas, in your mind, at the same time, for analytical and evaluation purposes.

If you accept the premise that you are what you think, then you will apprehend the value of the realization that you cannot afford to indulge in negative Thought.

Recognizing, and acknowledging, a negative attitude and comprehending the deleterious and distressing consequences inherent in accepting such an approach to one's Life is paramount.

This insight positions an individual firmly on the path to initiate mastering and implementing the enormous Power available to the Human mind.

Power that is liberated via the counter force of Positive Thinking.

Until that stage is reached whereby you can evaluate a given Thought on it's own merits, the best way to treat Negative thought is to . . .

Stomp on this mongrel immediately it raises its ugly head.

Consciously refusing to accommodate negative Thought, by coherently directing, as opposed to forcing, one's focus towards equitable outcomes, provides the working space necessary to construct the Mind Change that allows one to adopt and develop the Mindset where Rational Thought predominates.

Where Rational Thought predominates, negativity is viewed as the dangerous predator that it is, and loses  all attraction, or influence. Whatsoever.


A Poor Attitude Can Be Complex

Displaying a negative mental attitude indicates a lack of Conscious Self Awareness, of State Of Mind, on the part of the individual demonstrating a poor attitude. It also indicates a real sense of Fear.

Fear and negative thinking are bedfellows. Where we find one, the other is close by.

Aggravated by inadequate Self Esteem, a poor attitude inevitably exposes the holder liable to the deleterious influences of his, or her, environment.

All the while, the coexisting, equally copious, spiritually nourishing aspects of Life pass on by, sadly unheeded.

Negative environments are as lethal to the effectual functioning of one's Mind, as consuming poison would be to one’s body. As a not so uncommon example, have you ever experienced a pessimistic workplace culture?

How did it make you feel?

Before we accuse our-self or another Human Being of exhibiting a negative attitude, we first need to define what is negative Thinking. 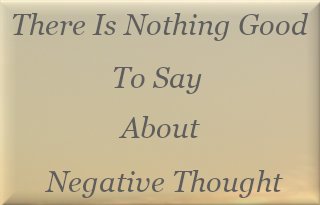 For the purpose of this discussion here we are dealing with Attitude - an individual's approach to Life - not illness.

Notwithstanding there is sound reasoning to hold the view that negative Thinking is a contributing agent serving to aggravate depression, it remains a separate state of mind from that of despondency. Which is a state that can be fleeting, or seemingly intractably permanent.

A dose of Despondency can strike an individual anytime. Leaving one with a difficult to brush off sensation of feeling down.

A positive Thinker, being well aware of this phenomenon, and able to recognize the difference between negative Thinking and occasional despondency, allows it to pass.

A negative thinker will use the same situation to consolidate and justify his dismal outlook.

Negative thinking is a State Of mind that refuses to accept progress. Individuals who practice this dismal mindset, by insisting on holding a negative mental attitude, make no attempt to help themself, and resist all efforts by others to resolve issues. Progress is improving a given situation or thing, made by resolving problems.

An intellectual burden to all who encounter him, a negative thinker is a source of, sometimes violent, disruption, whenever his thoughts turn vindictive and propel him to action. A dismal condition that applies equally to both males and females.

There is nothing good to say about negative Thought.

We should differentiate between the hardcore negative thinker, who habitually accepts and promotes his losing posture, and everyday life. 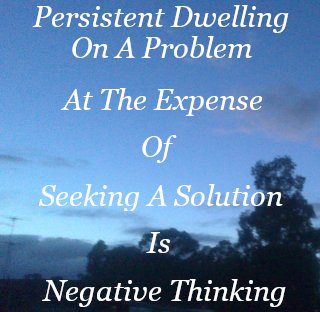 Everyday life consists of Problems. Not one Human is exempt from dealing with what many folk see as difficulties. Solving these difficulties is how progress is made through Life.

Although much effort must be expended to resolve problems to one’s benefit, we Humans are built to live, at the very least, a satisfying Life.

Nature provides the ways and means to lead such a life. We simply need to learn the skills she offers.

Both situations usually require resolution, that is, action. Once a problem is understood, it is not necessary to dwell on it. Instead, employing Positive Thinking, one dwells on arriving at an appropriate – meaning equitable - solution.

This happy state of affairs is achieved by maintaining a Positive Attitude.

Feeling down, on occasion, is a normal, if apparently inexplicable, element of the Human Condition. We are Electro-chemical Thought powered Beings. Waking at 3am and one’s World appears impossibly contradictory, or sometimes feeling overwhelmed, are normal events, and should not be classed as a negative mental attitude.

These three conditions can be lessened dramatically by adequate Support.

Even without appropriate Support in place, a Positive Thinking individual comprehends these conditions are transient and allows them to pass. However, to expedite the process, one can deal with them in the same way as when wrong thinking is the culprit.  From experience, this author finds this self administered cure for wrong thinking effective indeed.

Negative thinking can be recognized by the expression of negative Emotions and Undesirable Traits. Negative Emotions, and their derivatives, of which there are many, can merely hinder you, holding you in an unbalanced state.

Attaining life enhancing Good in an unbalanced condition, verges on the impossible. Unstable mental status is analogous to a leaking bucket’s ability to hold water.


Nothing To Be Gained

If there is any gain from negative behavior, the cost is almost always way too high. Not merely material cost, but also relationship and psychological cost. Much of the anguish and material loss Humans suffer, can be traced back to, and find their roots in the practice of the following undesirable traits.

An all too common scenario of Human Relationships - and surefire cultivator of a negative mental attitude - is the tedious, time wasting, and destructive tradition of Squabbling and Bickering. 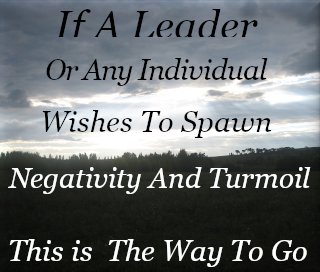 Bewilderingly one witnesses an all too common Undesirable Trait being demonstrated by many Leaders, of all persuasions. This type of leader, in an unwitting, yet inexcusable manner, set an arrant example that impressionable minds tend to imitate.

These leaders appear to behave in this manner in the ill-conceived perception that squabbling and bickering is what tough guys engage in.

If any leader or an individual, Desires to spawn negativity, and turmoil, this is the way to go.

Wise individuals can purposely decide to negate the disastrous influences of this black-hole of counter-productiveness. Recalling Napoleon Hill’s sharp words, enables one to stimulate and promote Conscious Awareness of his or her Behavioral Attitude.

Conscious Self Awareness engenders a state of Mindfulness which then allows one to see the futility of negativity and retain, or if necessary, regain, a Positive approach to life.


Propensity To Be Contrary

Arrogantly contributing to the fuzzy, Foggy Thinking condition that constitutes a negative mental attitude, and, of equal importance, a negative State Of Mind, is the fact that Human beings can be contrary fellows.

On a personal level, the mental stance of contrariness has ever intrigued this author over the decades he have observed and studied it. His curious disposition has led him to a disturbing but plausible conclusion . . .

Individuals who are most prone to contrary behavior are not in possession of a great stock of knowledge, and so have no way of telling if their opinions and perceptions are right or wrong.

Disagreement, and expression of the opposite viewpoint and sometimes acting on it, helps to make them feel Intelligent, and or Important.

That said, insufficient knowledge should not be seen in a derogatory context.


Next - How To Develop A Positive Attitude