Lack Of Cooperation Has A Simple Solution


Lack Of Cooperation Is Not Intelligent

Simply put, a lack of Cooperation is the root cause of the majority of the calamitous situations Humanity faces. We Humans are no strangers to the Law of Cooperation. It is this very Law of Nature that has allowed us to progress to the standard of living we enjoy in the advanced Societies of today's world. 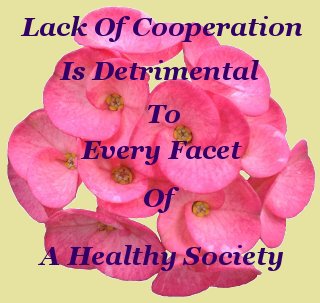 In view of our detached, haphazard application of this Law of cooperaion, Stagger and Lurch is a tad more accurate way to describe our advance.

Misconstruing this Law has deprived multitudes of their rightful and due inheritance, from Nature, to live a fulfilled life. A lesson, as a species, we don't seem prepared to learn.

When used sagaciously and judiciously, as our biological label, Homo Sapiens, indicates we should, cooperation offers the means to solving any problem we have the resolute endurance to resolve.

Any problem, from interpersonal to international.

If cooperation is the true agency by which Humanity grows, progresses, and advances, in every sphere of existence, then lack of cooperation should be regarded as a dangerous impediment to this process.


The Laws Of Nature Cannot Be Broken

These Laws can be ignored or disregarded, absolutely. Humans are doing that constantly, incessantly, - then wonder what went awry with their plans.

When one refuses to acknowledge, or disregards a Natural Law, purposely or otherwise, we merely set in motion a train of events that travels towards a different destination than the one we initially anticipated.

So it is when we refuse to work together

Cooperation is not doing another's bidding. Though at times this may be perfectly appropriate. Intelligent cooperation is both a Positive Thinking Attitude and a demonstration of knowledge. 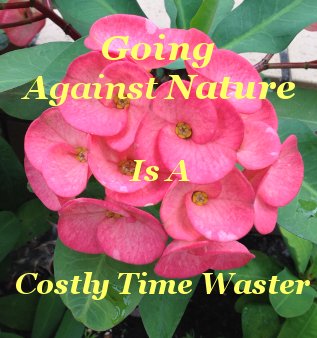 A Positive Attitude ensures one follows through with a given shared intention. In the full knowledge that one's actions, coinciding with another's, or others, will bring certain and definite results.

Anticipation of definite results implies a thorough understanding of just what the shared goal is.

This understanding is exemplified by the Wright Brothers whose definite desired result was to attain powered flight in a heavier than air vehicle.

Fulfilling this desire meant apprehending the Natural Laws that allowed them to achieve such a breathtaking goal.

These two Outstanding Thinkers implicitly grasped that going against Nature was a costly time waster. Their understanding left them a wide open field virtually to themselves.

Orville and Wilbur Wright went about the uncovering of Natures Secrets in a clear-headed and methodical fashion. Their sound Thinking methods offer insights for our politicians and other leaders who cling to a lack of cooperation as if it were a powerful weapon. Believing that obtaining advantage over their fellows is of higher priority than achieving goals via the Scientific Method.

It is, of course, a powerful weapon. If one's intention is to be self-interested and disruptive.

Incongruous and recalcitrant Behavior is not restricted to intractable children. Sadly, like a blight, incongruity permeates every level of society on the planet. A blight recognizable by the unpredictable states these Undesirable traits spawn, and the selfish desires of protagonists. 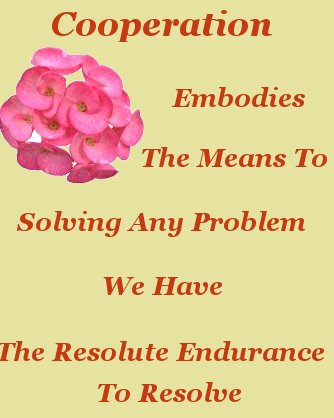 Protagonists whose refusal to share, either materially, or intellectually, are a threat to all we value. From personal relationships, to the welfare of our environment and it's every inhabitant.

Where ever teamwork can reasonably be expected, and let's face it, that is is just about every where we Humans interact, it bears us dividends when we keep in mind that cooperation is a two way street. And, by our own actions, encourage others to act accordingly.

The cause of a lack of cooperation is that selfish approach to Life epitomized by a Negative Attitude. Which itself has it's basis in a lack of knowledge and understanding of the Law of Cooperation.

Every Negative Attitude is founded in a deficiency of knowledge and understanding that must be addressed before any behavioral progress can be made.

Willing cooperation is exhibited by responsible, knowledgeable Good Humans. Even at times when cooperating means they are temporally disadvantaged in favor of the Greater Good. These wise folk know implicitly, like the Wright brothers, that we cannot fool Nature. Her books must - eventually - balance.


The Answer To Lack Of  Cooperation Resides Within

These wise folk also know that it is within the realm of Creative Thought, aka the Storehouse of Knowledge, that all solutions to all problems, except behavior, reside.

The solution to behavior resides within each individual's distinct understanding of how their own Thoughts determine their actions, via their emotions.

The most powerful influence on those who practice a lack of cooperation is not legislation, retaliation, or threats of punishment.

It is an earnest appeal to their emotions, via demonstrating our own willingness to work together and share. Working - harmoniously - together on a personal level, on a leadership level, and in particular, on a political level. Then, as the evidence mounts that working together pays superior dividends, allow their innate intelligence do the sums.

When the premise is accepted that the individual holds the key to their own behavior, then the solution to a lack of cooperation becomes simple.

Next -  New Era Of Cooperation