A Healthy Ego Powers Your Journey To Enlightenment

The Best Place To Start

Building, nurturing, and maintaining a strong, healthy ego is the very best place to start on your journey to enlightenment.

Prescient mind, Albert Einstein, famously stated that nothing happens until something moves. The same could be said about Personal Development and one's ego. 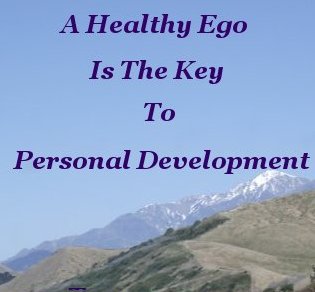 No Mind Development can take place until your ego is firmly, and definitely, under your care and direction.

If you have been studying this site diligently, we are well on the way to accelerating this never ending, but forever exhilarating, process.

So far, to this end, we have garnered a useful working knowledge of our visible hardware.

Examined the invisible or metaphysical side of things, and witnessed a few practical applications of the intelligence generated by the use of our greatest asset - our Mind - produced by our Brain.

It's time to investigate the software available that permits us to shape and tune the hardware to maximize it's potential.


We Are All Actors

One's journey to enlightenment begins, and ends, with the Ego, or, to coin a phrase, your emotional epicenter. From this inspiring wellspring of emotions emanates the full power of your personality. This is your self image or Persona.

This self image is what is projected onto the public screen of life by your Limbic System. And that persona's construction is as visible to intelligent eyes and ears as anything physical.

Personal development hones the acuity of this sense of insight intelligent eyes and ears have access to.

We start with ego because that is one's sum total. Everything you do, every move you make, every step you take, is dependent on your Wellspring of Emotions.

Much is said, good and bad, about the ego. But it is how, as individuals, we use this powerful element of being alive and Human that really counts.

Without needing to bother ourselves with the complex and contested theories of Psychoanalysis, typified by Sigmund Freud, we can define ego as synonymous with self. Ego is “I” -

The essence of one's individuality.

Notwithstanding this individuality we are all part of a bigger whole. That bigger whole being no less than the Universe itself.

“I" am my habits. My habits are formed by my recurring thoughts. Once formed, habits take over, heavily influencing how my thinking develops. And by extension, how I respond to my environment.

The vast majority of Humans allow their habits to be formed unconsciously. Captive to the vagaries of chance.

This is the best of reasons to take charge of your mind and consciously and purposely develop a healthy ego.

Embark on constructing an estimable Ego from the start and every other component composing this philosophy, will, over time and with dedicated application, slot silkily into place.

If you have been on the path for a while you already know that this start is the toughest bit, but you also know it definitely gets easier, and enjoyable, as you progressively take charge of your mind.

Greek philosopher Plato came straight to the point, highlighting the starkness of choice, when, two and a half millennium ago, he told us - 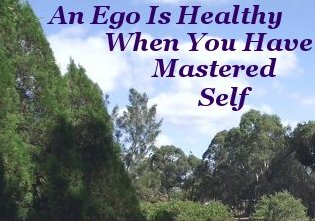 "The first and best victory is to conquer self. To be conquered by self, is, of all things, the most shameful and vile."

As pungent as Plato's dictum is, it clearly defines the sharp difference between a healthy ego and egotism.

Your ego is healthy when you have mastered self, placing you firmly on the path of mind expansion. That is, Personal Development. At it's extreme, egotism leaves one wallowing in a narrow minded world of attention demanding self centered conceitedness.

Fortunately, extreme egoism is much rarer than the egoism that leads to poor self image and lack of confidence, where one uses an inflated ego to attract attention with the hopeful intention of impressing others.

Paradoxically, egoism is rooted in a lack of self esteem, which is usually a product of a lack of understanding of how the mind functions. Much of Humanities relationship woes, whether individual or international, can be traced to this simple fact.

To implement changes for the better, one's ego responds best to gentle persuasion. Beginning with self acceptance. The first step on the road to a healthy ego.


A Healthy Ego - Your Greatest Ally

When you begin to win the intellectual battle with your ego, and the first sparks of inner harmony shine forth, you will realize that rather than merely attaining a  victory over self, you have now discovered your greatest ally.

Rejoice. A healthy ego is in the making.

It is at this point you will have the opportunity to construct a close, cooperative, consultative partnership with your other self. A partnership that will be on call, and will serve you for a lifetime.

Next - Your Most Important Partner