Moral Use Of  Spiritual Intelligence
Is The Key To Harmony

Spiritual intelligence and the material benefits flowing from it, form the bedrock of Human progress. 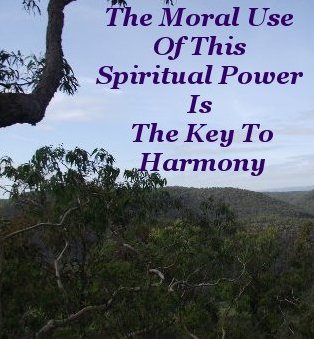 The Moral employment of this Spiritual Power is the key to Harmony in all our endeavors.

Without knowledgeable use of spiritual intelligence, one must rely on corrupt aids such as deception, physical force, and greed, to obtain the material . . .

After Creative Minds, using the upper reaches of Spiritual Intelligence have produced it.

To this poisonous and dangerous trio can be added intolerance, selfishness, ignorance, arrogance, and prejudice.

These regressive, degenerate forces have played an often dominant role from the beginning of Human History to the present day.

Degenerate forces are still employed in much Human interaction today and could, conceivably, regain the upper hand.

This threat is evident in our disintegrating behaviour and relationships on a global scale.

However, it is not too late to avert disaster.

Beginning with we individuals taking charge of our own minds, we can persuade recalcitrant leaders that to create a better world - ideally a Peaceful World - they must behave in a better manner. Spread the word, Personal Development rocks.

Not withstanding insane dictators, we witness these negative forces being played out in daily dealings by people who reason that to get what they want from life, the only path available to them, is to take advantage of, and manipulate, others.

Incognizant of the depth, and breadth, of Spiritual Intelligence, and entirely impervious to the damage that they inflict, these negative forces form the foundation of a morally destitute soul's thinking.

A pattern of thinking that then becomes their habits and actions.

This insidious behavior is a tad more common than one may, at first glance, recognize, and is often disguised as being of benefit to the recipient.

But to the comprehending mind it does not disguise the crude, degenerate behavior driven by the desire for power, domination and excessive wealth.


On A Serious Note

There are excellent practical reasons to denounce this crippling misuse of  Spiritual Intelligence. 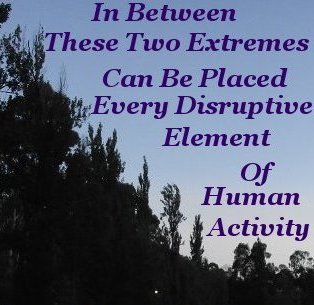 In just one instance, greed, deceit, and their first cousin, stupidity, have brought the world's economy to the brink of collapse.

As equally serious, multitudes have lost their freedom, and many their lives, or are in imminent danger of doing so, to these same forces.

In between these two extremes can be placed every disruptive element of Human activity.

A great measure of administrative 'problem solving' response by our leaders to these wholly disruptive elements is also founded in lower plane thinking.

Our leaders are implementing measures from repressive legislation to outright oppression of a people.

The antidote to this brutish behavior is Personal Development and a working knowledge of the Spiritual Power at our disposal.

Power achieved and implemented via a Philosophy of Natural Law.

The more we educate ourselves in how our mind functions, and practice our new-found knowledge, the less room there is for those who would dare to indulge in evil, or indeed, stupidity, to operate.

Although this may appear, superficially, a solely Moral issue, I want to make the case that it is also an intrinsic intellectual issue, revolving around the recognition, understanding, and application of one's innate sense of Spiritual Intelligence.

Access to spiritual wisdom is gained by taking complete charge of one's own mind.

In other words, once you are in complete charge of your own mind, and in particular, have discovered and possess the Ultimate Secret, no one will be able to manipulate you without your express permission.

No doubt, you won't be giving it. 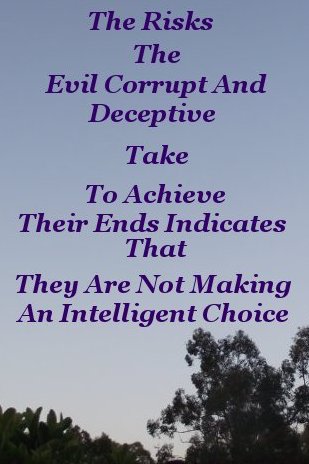 Taking charge is doable, but not easy. Paradoxically, the effort required to do so, is it's own reward.

The fact that it is not so easy to take charge of one's mind may help to explain why negative forces typified by greed and deception, are so prevalent.

And so tempting to the lost souls that practice it. But it is just as likely that they are unaware of the power of their minds. They know no better.

The risks the corrupt take to achieve their ends indicates that they are not making an intelligent choice.

It also indicates the corrupt have no knowledge of a choice existing. Even the diabolical evil may change their methods if they surely understood that they had a choice.

Lack of knowledge is neither an excuse, nor reason, for doing wrong. Under any circumstances.

In the same manner a drunk driver acts as if he possesses superior driving skills, corrupt and deceptive individuals act as though they are smarter than the rest of us. This is an intolerable problem. The solution though, is definite.

The Spiritual component of life offers, - via means of your Intuition and practicing this Philosophy - the prospect of developing and honing your problem solving skills to a sharpness that only you define the boundaries of.

With a healthy working knowledge of Spiritual Intelligence and Natural law in your possession, you will never be at the mercy of another who sees you as someone less intelligent than them. Or who wishes to dominate you, in any manner or form.

You will have achieved two noble milestones on the highway to an equitable Future. Self Reliance, and Joy.

That is just the beginning - - - of genuine freedom.