Purposely Eliminating undesirable traits is an integral element of Personal Development. And a priority in our quest to maximize our potential as a thinking being.

How we proceed along the path to achieving this priority is crucial to our own, and our species, well-being and happiness. 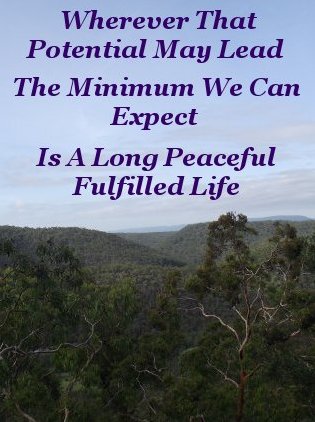 Natural Eugenics offers us an easy definite plan of action to create and foster a lifestyle that promises to eventually maximize Humanities worthy, meritorious potential. Via our inner Human machine.

Wherever that potential may lead, the minimum we can expect is a long, peaceful, fulfilled life.

This may present a rather Utopian proposition, and indeed it does.

But even without the benefits of a nurturing environment from conception, there is much we can do to improve our currently less than Utopian state of mind affairs.

If we accept as fact that we are products of our biological heritage, and, by responding to our environment thoughtfully, we can, as Parents and Guardians, influence the path future generations follow, we can also come to the conclusion that we have the same influence over ourselves in the present.

This influence over one's self presents three choices. It can be employed to totally restructure our self image. Merely tweak and refine that which we have already built and are happy with so far. Or by omission, consign one's self to the scrapheap of unfulfilled potential.


Undesirable Traits Can Be Dominant Influences

The dominant unconscious influences at work in our Nature are the licentious undesirable traits that perhaps were essential to the survival of our primitive forebears.

However, that they were essential to survival is not my belief. Far from it. 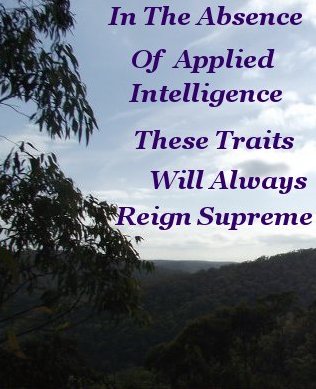 Other species display these same traits and, just like some Humans, attempts to use them is made by a few wayward members.

I am much more inclined to believe the employers of these traits use them as a substitute for a lack of skill to employ their thinking power.

Our primitive forefather's tardiness to embrace and develop positive thinking skills condemned them to a life of cold penury and subsistence.

Existing in circumstances of perceived limited resources, generated by a self imposed lack of imagination, the vile traits of greed, deception, domination, and violence were no doubt seen as a distinct advantage. Encouraging Evolution to fast track Humanities dark side.

In the absence of applied intelligence these traits have reigned, and will always reign, supreme. Actuated by default, they require little effort to implement. Which helps to explain their still relatively wide-spread use.

While it is understandable that our species behaved savagely in the absence of applied intelligence, it is incomprehensible that such amoral behaviour has persisted to the current era. Presenting the World with Humankind's greatest impediment, and challenge, to constructing a truly egalitarian society. And survival.

In modern times, undesirable traits destroy personal relationships which flow over to destroy Families, Friendships, Business opportunities, and Inter-National Alliances. At their worst they can and do subjugate entire Nations. Hindering the progress of Humanity to the point of regression.

Ample evidence to support the existence of this primitive behavior can be found in every trouble spot on Earth. And every unresolved dispute. 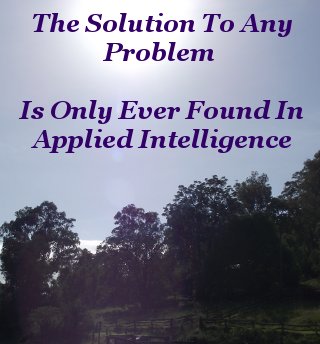 The solution to any problem is only ever found in applied intelligence.

Yet we still attempt to control our fellows, and situations, by using force, domination, and and that old, popular standby, intimidation.

Another lesson yet to be learnt.

Residing on the cusp of conscious awareness, the urge to respond to untenable traits in kind is ever present. Possibly a throwback to an earlier period when preservation of self often provoked a blind, violent, reaction.

Exerting a base influence, these indefensible non attributes readily offer themselves as a solution to a problem, as does a child, having limited negotiating skills, throws a temper tantrum in a not always vain hope to achieve his ends.

Even though we witness much primitive behavior today, these are not primitive times. 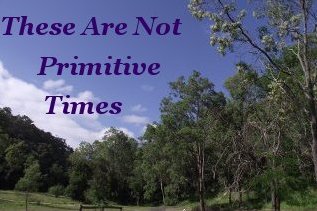 We are engulfed in intelligence as it waits in the wings. Ready to supply solutions to problems. As breath supplies oxygen to life.

All we need do is embrace and exploit this gift from Nature.

The more familiar one is with this phenomenon, the less likely he or she is prepared to accept undesirable traits as "normal" behaviour within society.

The less acceptance, the greater the scope and ingenuity of our problem solving abilities become. This understanding narrows the battle every Human Being must engage in, and fight to the death, to a simple choice . . .

Undesirable Traits Do Not Rock!