Collaboration Is The Future

Like instances of it's intrinsic to success constituent, Cooperation, graphic examples of Collaboration abound.

Ranging in scope, from simple to complex, Collaborative Effort empowers Humans to achieve the otherwise impossible. The collaboration gamut is infinite. From creating entertainment to the practical application of knowledge via intuition and fundamental research.

Collaborative exertion has built Society so far. Humanity continuing to function in concert is the only sustainable future.

A bright, prosperous, future in which every Human can play a role in ensuring collaboration is all embracing and ubiquitous.

Grasping the how and why collaboration works, will support and maintain this important role.

This page touches on that understanding. We also introduce examples of collaboration.


Insights Into Examples Of Collaboration

The co-authors of the insightful book on creativity, Organizing Genius, Warren Bennis and Patricia Ward Biederman, relate the gripping, no holds barred, tale, of breathing life into the legendary Disney collaboration, Snow White and the Seven Dwarfs.

Organizing Genius is one excellent book that delves into this phenomenon of collaboration.

Narrating in the same gripping vein, these two authors move on to detail diverse examples of Humans collaborating across a wide spectrum of activities. Digging deep into the psyche, and character, of real participants in what they term “Great Groups” the pair seek to comprehend, and convey to the reader, in a logical fashion, the underlying mechanism of what exactly it is that allows collaboration to succeed.

Concluding that collaboration is not for everyone.

The authors conclusion is quite understandable. One must develop a definite mindset to be a collaborator.

Intrinsic to the seductive glitz of promising products, lurks the potential to destroy itself. This potential comes Courtesy of a refusal to work with Nature and put aside the false ego.

Collaboration is a purposeful act. Egoism has no part to play.

Once this fact is fully grasped, and accepted, individuals can become an integral element of a collaborative effort that is compatible with our innate talents, abilities, and thinking capacity.

Organizing Genius is an illustrative exercise that leaves the reader in no doubt that as successful as Humanity has been at implementing collaboration, we still, as individuals, who form groups, have much to appreciate and learn. 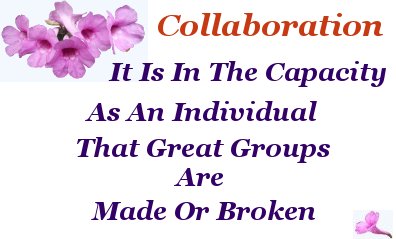 It is in this Capacity as an Individual that great groups are made. Or not.

From the impressions gleaned by the passive observer, great groups are seemingly ephemeral. Wafting into, and out of, existence. As if on the whim of an indulgent benefactor.

Perhaps this may be so. But familiarity with the Laws of Personal Development calls this view into question. Boldly suggesting we have much more influence over any Creative Project than we currently believe.

The musical duette Simon and Garfunkel, is a well known instance of two people collaborating, and creating something of enduring value, that could not happen otherwise.

Although Art Garfunkel penned poetry, to this authors knowledge, he never wrote a song. Nevertheless, without his cooperation and collaboration, Paul Simon's beautiful lyrics and melodies would take on a different hue entirely. Musically speaking.

Coming to grips with, and satisfactorily exploiting, a complex collaboration opportunity, demands deeper general and specific knowledge, and greater understanding of both genres.

Apprehension of the Mechanics of the Human Mind, via the practice of Personal Development, helps one to fathom the infinitely powerful Tool that Collaboration is. A tool at the disposal of all who would learn to employ it.

We Humans Beings are positioned on the cusp of the most exciting, stimulating, and positive threshold of awareness Human Consciousness has so far met with.

In conjunction with practicing Personal Development as a lifestyle, and noting the effect such practice has on one's mental performance, in particular, Attitude, studying existing examples of collaboration help us to gain this understanding of our own mind, that makes collaboration so effective.

The Large Hadron Collider, colloquially known as the LHC, is a Particle accelerator capable of reaching velocities just short of the speed of Light. And, as the name indicates, facilitates the collision of particles, such as the Hadron, at this extraordinary rate of motion. Particle is the imaginative name bestowed upon the many constituents of Atoms.

The entire LHC Project, from concept, to construction and operation, is a sterling example of complex collaboration, involving around one hundred Countries, this Big Bang replicator is at the cutting edge of Fundamental Scientific Research.

The LHC Project is the most massive and expensive Scientific Instrument ever built. Enabling inquiring minds to penetrate deep into Nature's secrets. This breathtaking Machine makes it possible for scientists to be privy to the initial seconds, but not to the absolute beginning, of the Big Bang, the momentous point in time when the Elementary Particles that constitute the Universe, and everything it contains, find their genesis.

The absolute beginning of Space-time was Pure Energy. And, as we have learned courtesy of Albert Einstein and his Relativity Theory, energy and matter are interchangeable.

If Energy had not been transformed into Matter then nothing physical would exist, including Humans.

Scientists at CERN, an acronym, from French named, Conseil Européen pour la Recherche Nucléaire, or, European Organization for Nuclear Research, proprietors of the LHC, are now joyfully endeavoring to deduce what constitutes energy and how the transmutation of energy into matter actually takes place. 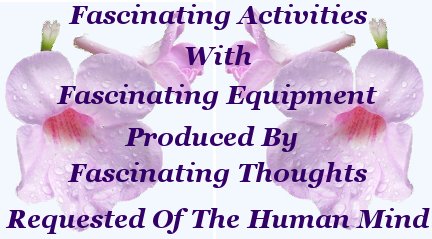 Scientists first imagine, via intuition and empirical means, how things may work. Then gradually and thoroughly test each and every hypothesis they arrive at.

Persistent intelligent effort eventually manifests in discovery, tracing, tracking, observation, and the identification of Fundamental Particles, and their function.

One such sought-after Particle is the Higgs Boson. For many years Physicists and others have believed that the Higgs Boson imparted mass to everything in the physical Universe.

More than a half a century, after it was first considered, the prosecution of the Higgs Particle recently climaxed in the confirmation of it's existence (July 2012) via experimentally creating mini Big Bangs in the LHC.

Both these rightly recognized and awarded recipients freely acknowledged that the efforts of many others were involved in this inspiring quest.

Elucidating insights into the Large Hadron Collider and more insights into  this enchanting example of collaboration that will explain the fabric of the Universe, and in due course, where we came from, can be found here for the Machine.

What would Pierre Teilhard de Chardin have given to access this machine?

The true pinnacle of examples of collaboration will be to substantiate and actualize the stupendous potential that our World, and more than eight billion Minds, offers to collectively create and share a paradise of peace, prosperity, and harmony. Set in an outstanding climate of encouragement, tolerance, goodwill and compassion. In other words, a collective Positive State of Mind, made possible via an individual Healthy Attitude.

Can we do it? Yes, this author believes so.

This collective Positive State of Mind will come about when Personal Development, and the many benefits being in charge of yourself bestow on an individual, becomes common, widespread, knowledge. In the same way that the fact the Earth revolves around the Sun, is now common knowledge.

Acquiring an in-depth comprehension of Cooperation and Collaboration, and appreciating the immense Power these two Principles deliver to the Human Mind are but two Tools we can add to our toolbox, from the philosophy of Mind Expansion.

Two more Tools that can be utilized to play an influential role in determining a future, worthy of our title, Homo Sapiens.

Next - Importance Of Cooperation