To Define Cooperation Is No Simple Matter


How Do You Define Cooperation?

To define cooperation requires one to explore, study, and comprehend the complex structure of this beneficial state of mind in its myriad possible expressions.

Doing so is is an exercise of immense value. 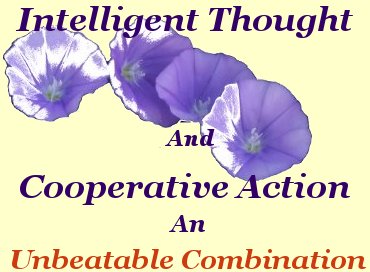 The Law of Cooperation is the bedrock on which all Human accomplishment is based and built. As ably demonstrated by patient, intelligent minds. Such as these two outstanding men possessed. Otto and Langen.

Cooperation is integrated into modern lives as never before. Becoming ever more significant and important as Societies grow closer and interdependent.

Both physically and spiritually.

To highlight the significance of this phenomenon we can use my situation as an example to get our heads around this significance and refresh our awareness of how much we are are only a part of a much bigger picture.

It is worth mentioning that whatever part one may be playing at any given time is always an essential part. Missing teeth on a gear wheel renders it useless.

As an inventor, I am working on a hypothesis. To prove whether or not it works, a machine must be built. I am working alone until I have produced a functioning prototype.

While this is neither a struggle nor burden, it is most definitely a challenge. I have the tools, machines, thinking ability, and expertise to produce such a prototype. And of equal importance, courtesy of a lifelong adherence to the philosophy of Personal Development, the appropriate mindset.

The downside of accepting such a challenge is the fact that it demands one's full time attention to inventing, resulting in forgoing income over extended time.

The alternative of outsourcing the manufacturing and coordinating the numerous and various components would place me in the position of an overseer which requires a different skill-set to the skill-set I know I possess and have total confidence in.

I could see myself readily doing the former, but not so readily the latter. An added complication of the latter course would be the necessary seeking of finance to fund an unproven idea to fruition.

Choosing the former alternative was an entirely intuitive decision.

A decision confirmed by a strong sense of confidence which continues to be steady and encouraging. And proven correct by the existence of a machine which, although not complete, is showing promise of being a winner.

The foregoing outline may give the impression that as an operator I am an independent entity. Such an impression is an illusion.

Independence applies only to my input of thinking ability. And the capability of manifesting those thoughts into their physical equivalent. 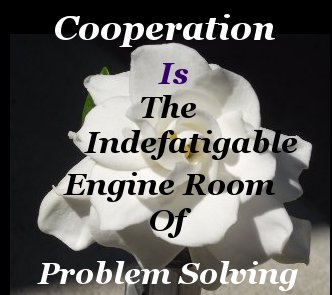 An important, even crucial, part. But a mere part none the less.

To initiate the flow of the integration of cooperation mentioned above, the first requirement to embark on such an adventure, and yes, it is indeed an exhilarating adventure, is to procure the willing long term approval of those who are affected by such lifestyle changing decisions.

Obtaining, and of equal significance, retaining, this type of approval requires acute understanding, and abiding, regular communication, of a depth not normally practiced by the majority of Humans.

The necessary Enthusiasm, and the Determination to follow through, is strengthened for all involved, by in-depth communication. A point well worthy of contemplation when admiring “overnight successes”. Or, on the other hand, when promising propositions are seen to crash and burn.

Elements not usually considered when we define cooperation.

It Doesn't Stop There

So far, I have gained the requisite intellectual support from people close to me, and together with a suitable workshop and mindset, established an environment conducive to achieving the first physical step of my goal. Build a working model. 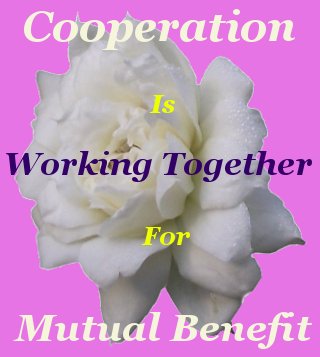 Here too, I find myself dependent on the cooperative activities of my fellows.

Such dependence relies on a web of interrelated endeavors from folk who produce essentials as diverse as materials to build my machine - to food that powers my brain.

If and when my machine proves to work, to proceed further inevitably calls for, and brings into operation, the cooperation of a number of disparate entities.

Analogous to the Human body's reliance on veins that deliver life sustaining blood, each of these entities require internal channels of communication that permit them to not merely function, but function fluidly.

Each of these entities, as part of a seamless operation, require and depend on, purposely established external channels of communication between each other.

Generated by the desires of one person, this complex scenario is only a drop in the ocean of Human activity in a suburb, let alone worldwide.

Every activity is dependent in some measure on other Humans.

When we define cooperation, in this manner, the relevance to success of developing this power as a steady state of mind becomes obvious.

As does the value of the individual's own understanding of the consequential nature of the role they play in today's complex society.

While the above outline may be the ultimate course of action, we know that it rarely comes to pass in that fashion in reality.

We also know in our heart that this ideal course of action is the correct and right course, and we hold the power, as individuals, to make it happen.

The complexity of situations is of little relevance, apart from acknowledging such complexity, when all parties involved hold an open mind tuned to the frequency of the Law of Cooperation.  Developing an agreeable, cooperative state of mind is the take to heart lesson.

To Define Cooperation In Depth Rocks!

Next - What Does Cooperation Mean