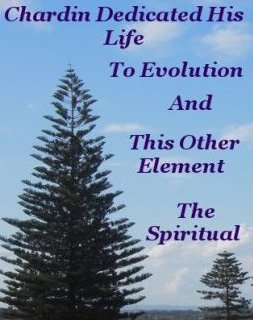 In common with many other brilliant and inquiring minds who preceded him, he distinguished another element along-side the Physical.

Life is more than just physical.

Pierre Teilhard de Chardin dedicated his life to both Physical Evolution, and this other, intangible, element of Nature.

The often misunderstood  Spiritual dimension of the Universe.

Encompassing Human wide Evolution, his lifework covered both our Physical and Mental progress.

Although we live in an ostensibly physical World, on this site we focus mainly on the intellectual and spiritual.

Pierre helps us to perceive and assimilate how this Intangible Spiritual Element of the Universe is the precursor, and source of everything physical and material.

He proposed that a Super-stratum envelopes our Planet, designating it the Noosphere. The Sphere Of Mind. Which is a third sphere, or layer, superimposed over the Biosphere and Lithosphere. Composed entirely of Human Thought. Yours and mine.

Pierre Teilhard de Chardin was of the definite mindset that each and every Human Being should be permitted to express themselves fully. Believing, as this took hold, it would hasten the evolution and maturity of his Noosphere. And eventually culminate in what he termed the Omega Point. 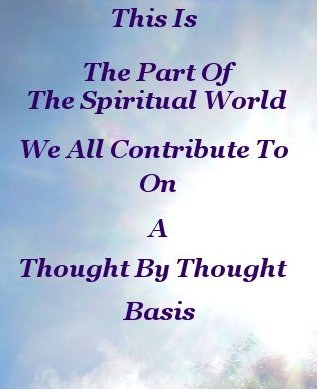 In his Noosphere,Thought follows the curvature of the earth. As do Radio Waves.

Infinite and boundless, accumulating, concentrating, and developing ever increasing intensity and convergence.

The Noosphere is the state of the art of Humanities thinking. The active and dynamic evolution of Human thought.

Thought mixing, melding, and cross breeding. Which then manifests itself, via our actions, as the physical state or condition Humanity finds itself in.

This is the part of the Spiritual World we all contribute to. On a thought by thought basis. Every thought we permit ourselves to entertain either adds or detracts value.

A cold sober, and dispassionate, understanding of this view should be all the incentive one needs to take charge of their mind. And direct his or her thoughts with utter clarity and awareness.

Entertaining no thoughts that might contribute to the distress and suffering we have already inflicted upon ourselves, and our living - some would say dying - Planet we call home.

Pierre Teilhard de Chardin lived through an especially turbulent and exciting period for Science. New discoveries were challenging many of the old and accepted theories.

The head  scratching discipline of Quantum Mechanics was only a youth and providing much grist for the Scientific Mill when Pierre purportedly first put pen to paper. And continues to perplex the best minds today. 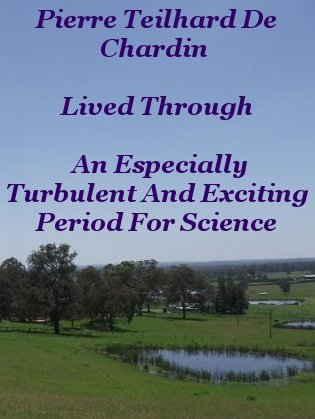 Humans were exercising their increasing ability to master the Air and Airwaves, including Radio Astronomy. And making significant advances in Medicine.

Molecular Biology and Chemistry were taking there first tentative steps. Atomic Theory not only made it's presence felt, but presented the opportunity to destroy ourselves.

Einstein's General and Special Theories of Relativity and Charles Darwin's Theory of Evolution were gaining traction.

Proving themselves in practice.

Awakening intelligent minds all over the Planet to the wonders of Nature. In the process exposing superstition and the so called supernatural for what it was, and still is. Namely, absolute nonsense.

Written against this solid backdrop of emerging, and consolidating scientific disciplines flexing their factual muscles, Pierre Teilhard de Chardin's   definitive Tome, The Phenomenon of Man, provides insights as to how great discoveries come about.

These insights apply to all our thinking and deliver a powerful reminder that before every action is thought.

If these favorable conditions are not met, however, the results can be as fruitless as wrong thinking. That is all they have in common though.

If an organic seed does not sprout, that's the end of the story. Not so with wrong thinking.

Wrong thinking contains the seeds of potential disaster. Way beyond our intentions merely not working.

We Humans can choose whatever we Believe to be the Truth. Which introduces a serious element of possible error when Truth is not founded in rigorous inquiry.

“Great Minds Think Alike” is more than a classy adage. Great minds indeed think alike. They invariably arrive at the Truth, no matter how tortuous the path. They do not rest on their laurels, in smug satisfaction. Great minds seek deeper Truth while remaining open to the slightest change.

Pierre Teilhard de Chardin was one such mind.

Next - Spiritual Intelligence And Evolution