The Evolution Of  Consciousness
Is Seeking Our Help

The Evolution of Human consciousness has progressed to the stage where, living consciously, developing our minds in pursuit of higher planes of thought, advancing intellectually, we abandon inferior ways of thinking. Including the regressive products of inferior thought. 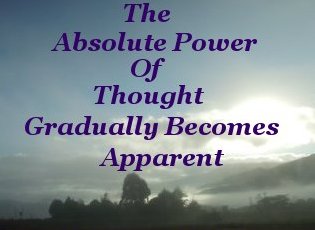 Those regressive products such as greed, violence, deception, anger, intolerance, and the unwise desire to dominate one another.

The temptation is always present.

Understanding and applying this philosophy to all our thoughts, and hence actions, equips one with the power to render any temptation impotent.

Higher plane Thinking - Personal Development - transcends the selfish form of individualism. One becomes aware of a different state of Consciousness.

We are now in contact with the higher reaches of Spiritual Intelligence.

The absolute power of Thought gradually becomes apparent, along with the realization that Humans determine reality with their Thinking.

With the same increasing complexity that brought about Conscious Life from inorganic particles, will come the Conscious Noosphere.

The process of Evolution was Physical up to the advent of Consciousness.

From the advent of Consciousness, the process includes the Metaphysical.

Alas! The Creatures who are inherently capable of complex problem solving are lost in the fogs of mysticism, and or denial.

Incapable, or refusing to recognise the Power of their Minds to comprehend their environment. 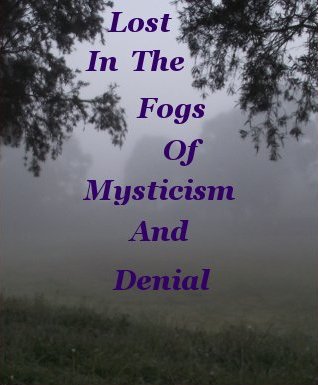 Let's reflect for a moment.

We Humans are the vanguard for the penultimate stage of consciousness.

That is, a truly Conscious Planet that can communicate with the Universe.

Nature expresses Herself in the one language throughout the entire Cosmos.

Infinite intelligence is a very practical means, provided by Nature for we Humans, or any Intelligent Being capable of reflection, to create a high tech society and live in Total Harmony.

If the aforesaid is The Truth, an inescapable Consequence of Moral Thinking, Reflection, and Harmony, will be the evolution of consciousness into a Conscious Noosphere.


Evolution Of Consciousness Has A Price To Pay

If the Noosphere is indeed the path to Truth, and survival, Nature will not deliver until we have paid the price She demands.

In what may be the most delicious twist of irony, Nature is demanding each and every one of us participate in the biggest Share ever.

For we Humans to enable the manifestation of this penultimate stage in the evolution of our consciousness, it requires the quite unprecedented step of permanent world wide cooperation. You may well agree, that at the time of writing, this step doesn't appear likely!! Just yet.

First, across the board, as a species, we need to come up to speed with what does cooperation mean?

Humans have indulged in all manner of Political Regimes --- ---- only to find them them desperately wanting.

Democracy, although not perfect, is the system that offers us the most hope of unity and progress for the future.

Democracy's survival, and that of Humanity itself, pivots on Personal Freedom.

We don't need more restrictions on Personal Freedom, in order to "protect ourselves”. Of substantially greater value is individuals attaining Self Reliance via a definite understanding and practice of Personal Development.

Self reliance and harmonious democracy provide Nature with the  primitive vehicle to begin evolving us towards the Omega Point.

This is already happening. Personal Development is gaining the attention of Intelligent Minds all over the planet.

Despite the hair raising bellicose antics of the violent philistines who would have it otherwise.

Once the tipping point is reached, where a significant number of us possess mastery of our minds, and we are working in concert, currently intractable problems will vanish as if a puff of smoke.

We who cultivate our minds and live our lives to function on the highest planes of thought, abandoning the shackles and baggage, along with the attendant self inflicted woes and miseries of lower plane thinking, are the vanguard and kernel of the seed that will evolve into Chardin's Conscious Noosphere. 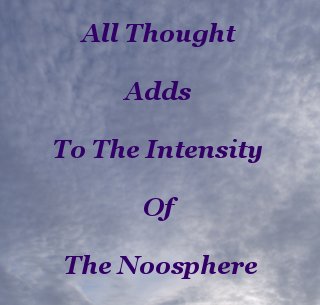 While all thought adds to the intensity of the Noosphere, we can determine the direction thought takes.

By practicing Moral Thinking on higher planes, via Personal Development, and contributing our knowledge, - truth - in a spirit of willing cooperation, we can purposefully influence the evolution of Consciousness.

We become separate Thought Centers which converge in harmony to increase and compound the complexity of the Noosphere. It is this compounding Moral Complexity that Nature will use to evolve a Conscious Noosphere, and place us within comfortable reach of the Omega Point.

Nature now needs our help for this next stage. She has provided us with all the resources we need to contribute effectively.

Specifically, She has endowed the Human Race with a Mind quite capable of comprehending and implementing Her laws.

Moral use of Infinite Intelligence leads to sustainability, immoral use leads to destruction. History teaches us this. 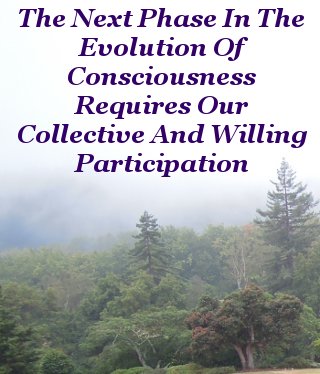 Einstein exhibited a definite pathway to discover the unknown in Physics.

Pierre has offered a definite pathway to discover unknowns in metaphysics.

Seeking Truth by employing the Laws of Personal Development to modify our behavior, to enable Humanity to bring about Essential Harmony in all of our endeavors. Eventually reaching the worthy goal of Point Omega.

Whatever form it may take.

The next phase in the evolution of consciousness requires our collective and willing participation.

The Evolution Of Consciousness Rocks!