What Does Cooperation Mean?

What does cooperation mean is discussed on this and a number of following pages under related headings.  define cooperation Begins this discourse.

What Does Cooperation Mean

Cooperation can be considered an overarching, all encompassing umbrella. A state of mind that brooks no nonsense, but is ever ready to work in harmony with others. 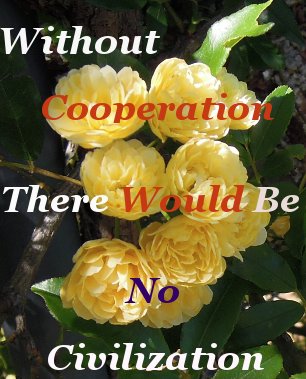 All the way up to vital international agreements containing the fervent hopes of protecting ourselves from our inclinations of folly at the highest levels of authority and influence.

These agreements work when mutually respected, vindicating the power of acting in harmony. Without cooperation there would be no civilization.

Comprehending the philosophy of Personal Development enables one to understand, get along in concordance with, and influence others.

On purpose. Without threats, without violence, and without the ugliness of attempted domination.

This comprehension should be of particular interest to leadership, where an infusion of cooperative and tolerant understanding of others, meaning each other, would make an immediate and enormous improvement to the quality of life of every living creature on the planet.

Any leader is a stand-out when he or she embraces and implements the tools provided by the philosophy of Personal Development. Using these tools to instill confidence in intelligent followers. And for encouraging self empowerment.

These folk, incidentally, are our strong leaders. They solve problems and make progress without recourse to violence, deception, and corruption.

Violence, deception, and corruption are the bane of progress. Retarding the advancement of society.

Intelligent cooperation provides the means, a definite pathway, to peace. And prosperity, in all Human endeavors.


No Reciprocation - No Progress

It would appear to me that we allow primitive behavioral instincts to influence our actions. This type of behavior can only lead to strife and serious confrontation. Even if the protagonists have superior fire power, so to speak, at their disposal. 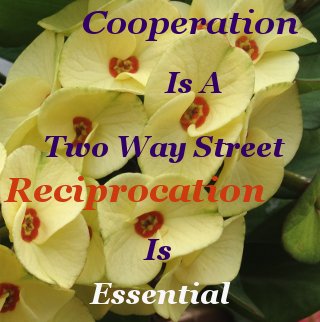 Superior fire power is always at the mercy of superior Will Power and Thinking ability.

All the advantages we perceive over our fellows at any one time have a predetermined shelf life before the tables are turned.

A cooperative mindset is a sound foundation, and, it should be conceded, the only foundation, on which to build stable relationships. This is a two way street. Reciprocation is essential.

Whatever stage of cooperation we are at, one thing is absolutely certain. Where there is no reciprocation there is no progress.

Cooperation is one of the most powerful laws that Nature allows us to be privy to. Yet it can be, and is abused. With devastating consequences.

What can these devastating consequences be ascribed to, other than the lack of awareness of this potent tool?


Be Reasonable - Do It My Way

The first time I came across the saying, be reasonable, do it my way, it drew a giggle.

Young and inexperienced in the ways of Human behavior I believed that elected authority was in rational control. That we had capable and knowledgeable wise minds running the show. 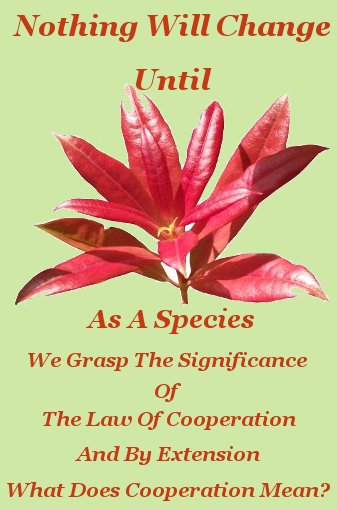 On the surface, apart from a few dopey criminals being repeatedly hauled before the courts for attempting to take advantage of their fellows, society seemed to be running like clockwork.

In my young, euphoric, state of callowness I even believed war was fought to keep the bad guys at bay. Unaware that war is an admission of total failure.

My teenage mind simply did not grasp the fact that using force and violence against our fellows would not teach them a lesson.

Failing to relate that the repeated (often brutal) canings at school only made me more determined to do things my way.

It was some years into my search for enlightenment and my horizons were gradually widened by comprehending, but by no means condoning, much of what was happening in the world that I made the connection between force and ignorance.

Teetering on the brink of nuclear warfare for a couple of decades gives one pause to wonder what the dickens are we, as intelligent beings, doing.

To my mind, the perpetrators of dissent in the various and too numerous trouble spots around the world are the same mindset as those so called disciplinarians at school, who saw violence against their young charges as legitimate means to enforce conformity.

Often, the desire to dominate overrides intelligence. And creates chaos.

Nothing will change until, as a species, we grasp the significance of the Law of Cooperation, and by extension, what does cooperation mean?

Be reasonable, do it my way, no longer elicits a laugh, when it is used as a blatant attempt to force one person's will on another.

My eclectic sense of philosophy has enabled me to understand what does cooperation mean, and choose to add to the joy of the world, and the joy of being a Civilized and Good Human. By working in total harmony with like minded others, to achieve universally mutual benefit.

Asking - What Does Cooperation Mean - Rocks!

Next - Cooperation Not Conflict