Undesirable Traits Are Well Within Our Sphere Of Influence

Undesirable traits materialize in all manner of situations. The form they mirror at any given moment is a product of the individual's mental inclination and attitude. Ranging from merely annoying to perniciously destructive, all have an unwelcome impact on our relationships. And the wider world. 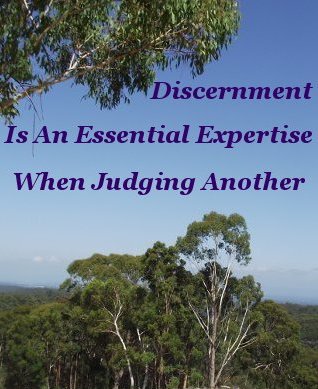 An individual's attitude is heavily influenced by one's predominant thoughts, which, in turn, produce one's habits, and therefore to a great degree, he or she becomes predictable.

The ability to discern, however, is an essential expertise when judging another.

Supposition and assumption are never adequate grounds on which to base an interpretation of character.

Particularly when we enter the realm of the truly dangerous and destructive traits practiced by some Humans.

Deception is the bane of healthy relationships, and quite possibly is the precursor of all other regressive traits we Humans unthinkingly adopt and indulge in.

Practiced by the unscrupulous, these universally abhorrent and reviled pernicious traits include greed, vengeance, violence, domination, intimidation, arrogance, and misuse of force, and are the source of all social ills.

Being able to recognize them in others before they inflict damage is an extremely useful tool to aid wise decision making. Particularly in politics and business dealings.

In the not too distant past, no justification was given, or sought, for conscienceless behavior. Those prepared to use violence dominated. 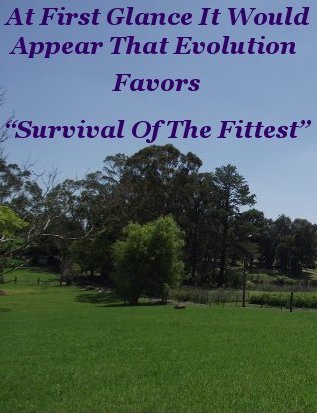 In more recent times, as education spread and democracy expanded, it became necessary to at least offer an explanation for amoral behavior.

The ideal excuse was presented in Charles Darwin's work on Evolution.

At first glance, it would appear that evolution favors “Survival of the fittest”. A term coined by English Sociologist and Philosopher Herbert Spencer.

To the serious detriment of Homo sapiens, Spencer's interpretation of Darwin's Theory has been perverted by devious Humans ever since.

Conduct and practices ranging from barely legitimate to utterly amoral.

But closer inquiry will reveal the chronic, shallow, self serving nature of the thinking that produces such uncivilized conduct.

Thinking as shallow and self serving as baneful traits per se.

In a behavioral sense the world we live in has moved at the same speed as evolution.

Evolution has traditionally but not always, as evidenced by the Cambrian explosion, moved at a glacier like pace.

This slow progress is observable in the minimal progress achieved in the two million years between the birth of Homo Habilis and the arrival of Homo Sapiens. Sapien's recent technical progress can only be described as phenomenal. But behavioral advances at best as questionable.

The only reason we have anything more than resources in their natural state - picture our ancestors scavenging for wild fruits etc - is because  one of our forebears discovered creative thought and fashioned a tool.

Placing the first known external influence on the process of evolution of intelligence.

A blight, in the shape of undesirable traits, has imposed a leaden burden on the moral progress of Humanity possibly from the day that first tool was used.

Perhaps with that initial use, our primitive mind conceived of a personal advantage to be gained by outwitting another. Giving birth to deception and influencing the structure of genes passed on to the next generation. Initiating and fostering an avalanche of obnoxious offspring in the form of undesirable traits.

Despite this blight, since Homo Sapiens appearance, applied Human intelligence, under external influences, has accelerated at a vaguely disconcerting rate of knots. Ever more so since we abandoned nomadic lifestyles and settled into established communities. 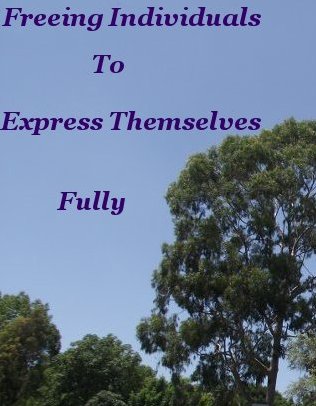 Established communities demanded advanced thinking ability to sustain survival. Triggering and unleashing a flood of creativity and innovation which show no signs of reaching it's zenith.

Little emphasis however, has been placed on building and nurturing a beneficial mode of conduct that promotes the well-being of both the individual and sustainable society at large, and can be passed on to future generations in concert with the well earned technical triumphs.

Even today, most all attempts at any behavior modification are founded on the ill-considered platform of punitive measures.

The single solution to this ageless problem will continue to elude us until we comprehend that individual freedom and responsibility contains the seed, flower, and fruit of this conundrum.

This philosophy of Personal Development, embodying Natural Eugenics for the benefit of future generations, and moral applied intelligence as it's fundamental driver, offers a constructive, functional, dependable mode of behavior, that once adopted will become spontaneous.

Henceforth liberating individuals to express themselves fully. By initially understanding, and then directing, their own emotions. In a safe, benign environment of compassion, responsibility, and expansive clarity of thought.

Claiming freedom from subversion and contributing to genuine universal happiness and prosperity.

Undesirable Traits Do Not Rock!