The alliance you enter into, with yourself, to build a healthy ego, must be, in common with all prosperous partnerships, based on sharing the highest principles. 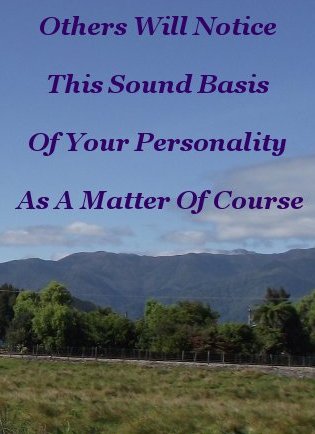 As you adopt and implement these principles they will enhance, and be reflected in, your self image.

Others will notice this sound basis of your personality as a matter of course.

These highest principles we share can be found in the Natural Laws available to all Humans.

Laws embodied in the philosophy of Personal Development.

An enhanced self image, a product of high self esteem and a healthy ego, is built over a lifetime. When circumstances change, you change your self image to meet them. Becoming evermore capable and competent. You know and assert your moral rights. Generously extending these same rights to all others.

An integral part of Personal Development, tailoring your self image is a project that never ends, the longer you live the better it gets. This ongoing progress delivers abundant satisfaction as we become one with the driving force of the Universe -  Spiritual Intelligence.

Conjunction with Spiritual Intelligence is Enlightenment. your Inner sight becomes acute. Problem solving is a joy.

First though, we must become one with ourselves.

In the beginning there will necessarily be a personal struggle. One's unrestrained  ego is a wily opponent, used to getting it's own way. Predominantly unopposed. 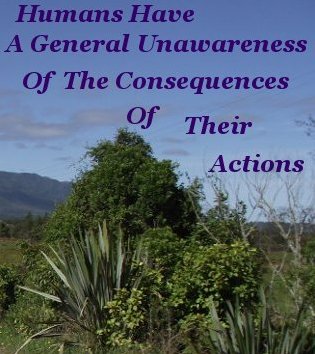 People generally do what they want to do.

More often than not we find that we respond to the unfettered primitive ego's bidding.

Regardless of whether it is the right thing to do under the circumstances.

This is impulsiveness, and is not to be confused with criminal activity. Which is another - inferior - mindset altogether.

We Humans have a general lack of awareness of the consequences of our actions. And we are often the victim of our own - rash - decision making.

This personal struggle is one of the toughest challenges you will ever face. Albeit, the initial struggle with the ego is a struggle every Human on this planet must face.

Emphasis needs to be placed on the fact that building a healthy ego is not achieved by mere force. That is, the use of sheer willpower.

The misuse of force is at the base - often heinous - end of Human behavior and is a clear indication of the primitive ego being in control.

The misuse of force applies to all distorted Human relationships, ranging from two squabbling individuals to governments indulging in violence and warfare.

Note that I state misuse of force. Not use. To place this into perspective we can use a mechanical analogy.

I have a mechanical engineering workshop. One of the machines that is used on a regular basis is a 30 ton hydraulic press, which I, ahem, built myself.

Pressing metal components together is a very effective, efficient method of manufacture and assembly in the appropriate circumstances. Saving materials, time, and usually, but not always, eliminating the need for fasteners.

Hydraulic presses, useful in the extreme when needed, obviously use force. 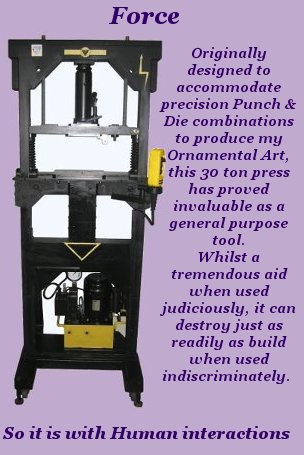 But there is a distinct caveat in operation each and every time I use my press to assemble components.

Specific tolerances need to be applied for a specific instance. Measured in thousandths of an inch.

If I get these close tolerances wrong, either too little or too great, I destroy the work.

Meaning not merely a waste of materials, but depending on the job, an irretrievable waste of time, from hours to days.

And as we know only too well, lost time is costly indeed.

Human relationships respond to the laws of force in exactly the same manner as do inert materials.

A healthy ego is vitally aware of this, and puts it to positive application.

Nelson Mandela, a man, indeed a Statesman, who needs no introduction, is a fine example of such awareness and positive application.


A Healthy Ego Is Competent

Force needs to be handled with a deliberate understanding of the consequences of its utilization. We see the devastatingly destructive effects in both Human and material terms, of incompetent use of force in daily life, epitomized by the bully.

Standing out like a sore thumb, whether he or she is active in the home, school, street, workplace, religion or politics, the force abuser is putting on public display their poor self image and lack of knowledge.

The last thing you want to bully is your own ego.

Far more effective is amiable persuasion. Using force gently in the form of encouragement to persist in doing the Right thing. And following through.


How Well Do You Know You? 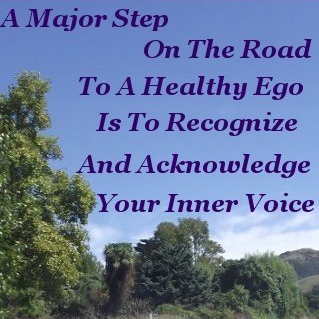 A major step on the highway to a healthy ego and self image is to recognize and acknowledge your inner voice as a ”separate entity”. Employing it as such is an indispensable tool.

In the same manner that you would get to know another person you can get to know yourself.

Like some folk, our inner voice is an incessant chatterbox, constantly seeking attention.

Aka a healthy ego. Our wise inner voice and open, intelligence seeking mind, were made for each other.

Next - A Common Misconception