Creativity Versus Competition Is A No Brainer


Creativity Is for Everyone

Creativity versus Competition is a hot potato. A contentious matter, subject to earnest opinion.
From an early age, we are led to believe that Competition is the way to go. That Creativity is the preserve of the few.

This page emphasizes the value of Thinking and Imagination. Both essential components of a Creative Mind. 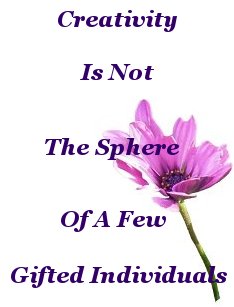 This author's own heartfelt understanding was formed and matured many years ago. An understanding influenced by his discovery of the ultimate secret of the mind.

This author believes Creativity versus Competition is a no brainer. Creativity reigns supreme.

Competition serves a useful purpose as discouragement to rapacious types from ripping off others when their ability to Think and Imagine fail them. Otherwise it is of use only when it lends itself to Positive Thinking and the expansion of one's mind.

Contrary to traditional opinion Creativity isn't the private domain of a few gifted individuals. Creativity is available to everyone and anyone who purposely seeks it. But to exploit creativity, seek it we must.

When exploiting our own Creative Potential, Self Empowerment occurs as a normal part of the process. We are entering the territory of Self Reliance. A wonderful state to not merely visit, but to live. To be.

Practicing Creative Thinking frees the mind, and enables it to open wide to the storehouse of knowledge that our early forebears ignored for the best part of two million years.

A winner take all competitive mindset blinkers one's Mind, blocking out this world of infinite possibilities. Partially explaining why competition can turn nasty.

Competition by it's very definition, means that two or more entities are vying for the same one thing. Casting aside the distinct necessity of sharing. That is the current understanding.

As the 1913 Webster dictionary so clearly puts it:

Competition is common strife for the same objects - Strife for superiority:

Strife is the basis of conflict. Setting one Human against another. Squabbling and bickering. Discord and resentment. The breeding ground for revenge.

Competition is a stagnating, and even regressive way to administer a Society, which is easily abused by the unscrupulous. Wherever we see winner take all competition we see turmoil.

Even so, because competition often offers a temporary advantage, many revere it.

Despite a misplaced reverence for taking advantage, that stimulating sustainer of the Human Spirit, Hope, shines ever bright on the horizon. 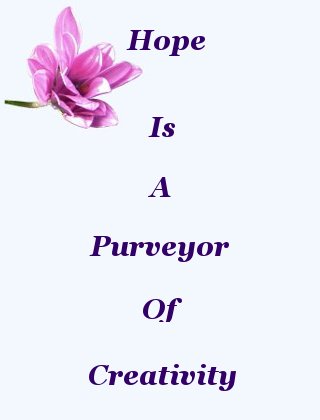 Hope directs Humanities Conscious Awareness towards a better way to conduct our affairs.

Hope is a purveyor of creativity. Hope vitalizes and enlivens our mind with the fine desire and ability to build better mousetraps.

A better mousetrap we are in so desperate need of right now is a Unifying Attitude that renders Humans capable of functioning in Harmony.

This Unifying Attitude is available to each and every one of us, of our volition and initiative.

This is good news. It means, that without being pressured, we can take the lead. And then become part of the as yet small but vigorously growing movement that has recognized that working together produces the worthwhile satisfaction and rewards from life.

Benefits that competition has never delivered, and never will deliver.

Humanities material progress depends on invention and discovery, and the purpose we put our discoveries to. Competition cannot do this, Creativity can.

This is an appropriate time to recall that invention and discovery are all about understanding Nature and Her Laws.

The Phenomena of Invention and Discovery, are, by far, more likely to surface under benign conditions of Harmonious Cooperation than by stressed out competition.

Winner take all competition breeds desperation. Even if one manages to become top dog, it is rarely a permanent position.

The specter of a faster gun is ever on the mind of the competitive entity. All the while he or she is absorbing and dissipating mental energy in defensive scheming.

In business as elsewhere in Life competition has been so well inculcated into society that creativity is neglected. 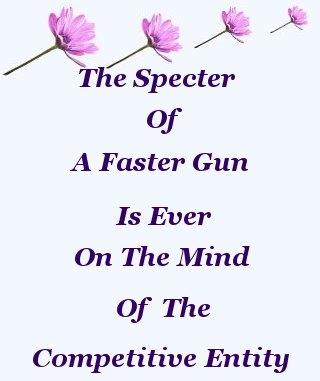 Seemingly immediately, his or her creative initiative is copied by the majority of players in a given field.

This is not to suggest there is a lack of effort on the part of these other players.

Instead, it suggests a lack of awareness that Creative Expression is part and parcel of all and every Human Being's make-up.

While busy replicating what they believe to be rare genius, their own creative potential goes unrecognized. Innate abilities unheeded, ignored, disregarded, wasted.

The commonest form of competition in the Business World is cutting the price of goods and services.

Unlike competitive sport where the victor can rely (mostly) on a set of rules that ensures fair play, no such rules apply to commerce. The only defense against a monetary assault is deep pockets or creativity.

When one rationally evaluates creativity versus competition, competition is soon revealed to be the intellectually poor relation.


Advantage must be real and sustainable

Genuine competition, in the guise of customer service and attention extended in a spirit of wholesome Goodwill, fulfilling another's requirements beyond their expectations, is as scarce as hens teeth.

This type of conduct increases the value of services given and can command a premium over the offerings of other providers. It is no coincidence that creative companies ask for, and get, higher prices for their goods and services.

Genuinely servicing customers beyond their expectations consistently, is the only sustainable advantage, and the only advantage that cannot be replicated.

Even if I have a unique product, I must offer unmatched service to retain a loyal client base.

Relatively speaking, the create, not compete, school of Thought is not large. But therein resides your bold, tremendous advantage. 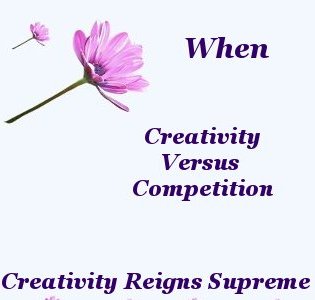 The relative scantiness of imaginative exploitation of their situation, by others, provides a contrast that reflects your Creative Efforts that allow you to stand out, like cheerful, bright sunshine. After weeks of dark clouds and cold rain.

Clients will for sure remember your competition eclipsing, wisely attentive service, and return.

So true is it, anyone can compete, particularly if one has deep pockets. But it takes an extra something to create.

That extra something is Thinking and Imagination.

Exploiting Nature's gift of Thinking and Imagination is the ever-present option of every Man, Woman and Child upon this Planet.

Throughout Life, no matter what be his or her requirements, whether in the capacity of an individual, or as part of an institution or government, all a customer wants, is to be satisfied.

When deciding how to satisfy a customer, Creativity versus Competition is not a challenging choice.

Ditto any other sphere of life.

Next - Example Of Cooperation