There is perhaps no greater example of Cooperation than that of Nature Herself. The very reason we Humans exist, is a direct consequence of Cooperation. Nature wastes not a stroke of creative effort. 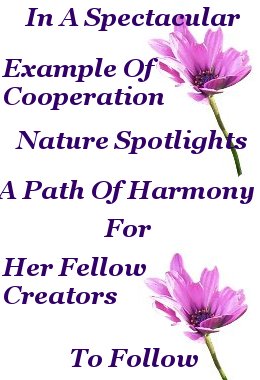 Our home and haven, Planet Earth, is an interdependent composite Ecosystem and as such is the perfect example of the crucial to success attributes of cooperation.

This environment that supports and sustains Humanity is constructed from closely related Systems which, in like manner, are composed of precise measures of Chemical Compounds of varying complexity.

Fashioned from the Elements and fabricated by Nature to coalesce into a mini cosmos that supports many forms of life, Ranging in scope from simple inert existence, all the way to consciously aware, intelligent, Life. Intelligent Life that can influence the very source that created it.

Conscious Life, capable of exercising options to observe, inquire, study, comprehend, and take action. Possessing the capability to apply these innate skills to it's self, it's environment, and far beyond.

This Intelligent, and Consciously Aware Life, epitomized by the actions of Human Beings, can communicate with Nature. Replicate and imitate Her, and Create. And when engaged in doing so, alter the state of Nature's compositions.

Useless by itself, each Fundamental Element becomes indispensable as it works in perfect Harmony with other elements, scaling to form Compounds. Increasingly complex compounds form Subsystems.

Each Element, Compound, and Subsystem, of little use on it's own, becomes indispensable to the finished System. Whether that system be animate or inanimate.

Employing adroit ingenuity, Nature combines and coordinates Her Elements, Compounds, and Subsystems into Harmoniously functioning Systems that form the World that sustains us and our dreams.

And provide sustenance for every form of life.

In a spectacular example of cooperation, Nature spotlights a certain path of Harmony for Her fellow Creators to follow.

Harmony is just one of the lessons Nature insists we emulate, if we are to attain satisfactory success. Clearly illustrating the non negotiable necessity of weighing up the consequences of our actions before we embark on them. Moral Thinking should be our tool of choice here.

On Earth, our Home, and most probably right throughout the entire Universe, this rigorous balance of animate and inanimate Chemical Entities, from Soil Microbes to complete Climate, is susceptible to interference and foreign influences. 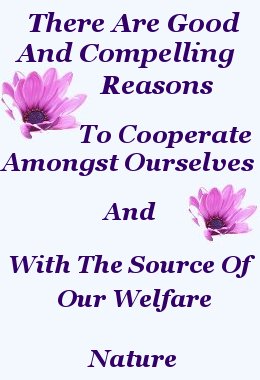 The daily activities of Human Beings, that consciously aware intelligent life previously mentioned, are proving to have a devastating impact on the integrity of that Chemical Balance, in this otherwise consummate example of cooperation.

Paul Jozef Crutzen, recently departed, eminent, Dutch born Atmospheric Scientist, described this irresponsible impact as the Anthropocene Period. In order to account for the adverse effect Humans have on the environment that supports them.

Anthropocene Period is an astute conclusion that is steadily gaining traction and well deserved recognition. As more and more people become aware of the tragic Reality we Humans have permitted to come about.

Nature's perfect system of harmonious balance based on the cooperation of compounds is so easily upset. But bear in mind – we have a ray of hope . . .

We can emulate Nature and alleviate the damage caused, by the simple act of not interfering She restores Her delicate balance.

Do we have the Desire and Will??

A serious example of injurious Human influence, via interference, on the ecology, is the introduction of foreign species where Nature has made no provision for their accommodation. And these foreign species subsequent impact on that ecology is wholly detrimental.

Sadly, just like some Human activity when dealing with our environment. 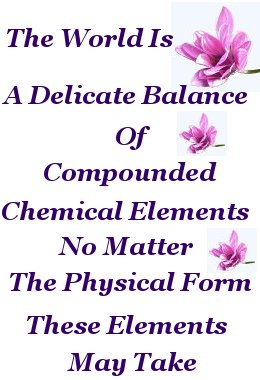 Decisions may be implemented with the best of intentions, but a lack of understanding and forethought can have far reaching and long lasting consequences.

Once implemented little opportunity to redress damage caused exists, beyond total eradication of the offending species.

The aforementioned comments are supported by the following two examples. One so far a dismal failure, and the other so far a tenuous success.

A tenuous success that we all must ensure endures and grows into a mature rock solid solution. Humanities existence hinges on our species ability to cooperate in total Harmony to achieve this solution.

The World we call home, and the entire Cosmos beyond, is a delicate balance of compounded chemical elements. It matters not the physical form these compounds may take.

We can estimate the Importance of Cooperation in all other avenues of life from studying and observing Nature performing Her work.

One local example of Humans failing to cooperate with Nature is that of the introduction of the Cane Toad, to Australia.

The cane toad was introduced to this Country amidst the Worldwide depression of the 1930s, in an at the time desperate attempt to exterminate, or at least, control, the Sugar Cane Beetle. An insect then laying waste to the Australian Sugar Industry, a substantial income earner.

The cane toad was heralded as an immediate, and biologically friendly, solution.

Eighty or so years later, and far from controlling the sugar cane beetle, which the toad totally ignored, this out of context amphibious native of Central and South America is threatening to devastate delicate ecosystems over millions of square kilometers. From the top end Northern Territory, to Victoria in the south.

With no natural predators to oppose it, this jinxed animal has freedom to ravage Native Fauna, migratory birds, and domestic pets. Any creature that attempts to kill and eat it, wild or domestic, almost always dies an agonizing death from poison.

Of no consolation, the cane toad is simply doing it's cane toad thing.

Time marches on as the Cane Toad wreaks it's growing devastation, in an all but unopposed advance.

Had Humans been just a tad more aware of how Nature, and Her inexorable laws work, and heeded her spectacular example of cooperation, devastation such as depicted here would not have come to pass.