It is sad commentary on our behavior that most businesses suffer from a lack of workplace cooperation in some manner or form. From mild to chronic. 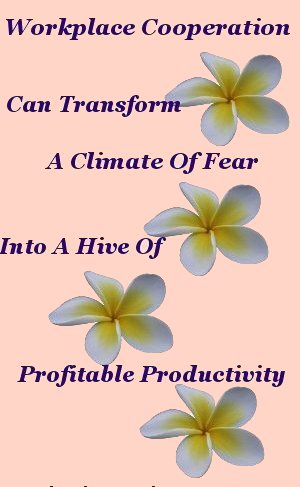 An ideal place of work is a facility where skills, knowledge, and time are exchanged for financial gain.

A bonus is realized when this ideal provides an outlet for creative energy, where personal satisfaction is derived from performing useful work.

Our everyday work environment is also an ideal, all-embracing venue to sharpen and practice our Human relationship skills, underpinned by workplace cooperation.

It is an act of misplaced wisdom to for-go opportunities where we get compensated for the opportunity to advance ourselves, our products and services, and our society.

But every day, all over the Planet, a scenario of quiet desperation plays out in many workplaces.

The primary cause of this loss of opportunity to advance is a misguided sense of self preservation. Triggered by a climate of fear brought about by a command and control management system of breathtaking rigidity.

Lost at the expense of purposeful creativity, sound relationships, greater profits, and the Common Good.

A climate of miserable fear exacerbated by ignorance of the potential of our Human Nature.

So called managers, seduced, and, sometimes, besotted, by a desire to control, often practiced within a hierarchical managerial culture of order throwing demand, and attempted personal empire building, produce, along with mediocre products and services, a whole slew of interrelated relationship problems.

Not the least, disgruntled, unmotivated employees and colleagues who do the bare minimum, in order to be paid to survive.

Whatever the degree a given company is afflicted by this self imposed turmoil, this type of workplace may as well be a war zone, recognizable as such by aforementioned unhappy casualties.

This climate of do it or else is not one wherein the generation of ideas and creativity flourish. Under these harsh conditions employees do not respond positively and contribute little or nothing to the health of the source of their income.

It has been succinctly (and accurately) described as leaving one's brain at the gate syndrome, when reporting for duty each morning. Managers who foster such a climate can rightly be accused of also leaving their brains at the gate.

The solution to this universal problem is not complex. But as the history of Human interaction so emphatically informs us, we are experiencing distressing difficulty in implementing it. Much to our detriment.

The Law of Cooperation provides the underpinnings on which to build a climate of trust and integrity wherein idea generation and creativity are fundamental to relationship building, problem solving, production, profits, and personal satisfaction.

All readily delivered via workplace cooperation.

The workplace is a major learning center. An opportunity where we are not only paid for our services but the opportunity exists to learn for eight hours or more every day.

With willing cooperation expressed by all involved, that same problem producing management hierarchy can transform itself into a leadership team that learns and earns alongside an unstoppable ensemble of doers and achievers to whom they provide unrestricted support.

Good example is imperative to establishing a sound cooperative culture in the workplace, or anywhere else. Humans are herd animals. 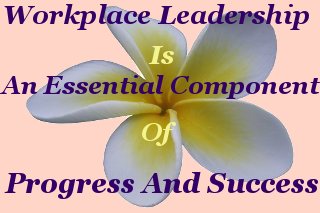 Leadership is an essential component of progress and success.

Even when initiative, of any description, not only cooperation, exists in the rank and file, it does not maintain itself in the face of lackadaisical, indifferent, apathetic management. Particularly when allied to insistent demands to achieve without sufficient guidance and support.

The entrenched, do as I say, not as I do, creed of the “boss” is rightfully being questioned more frequently, but this too, must be performed in an intelligent manner. Comprehending the importance of cooperation is fundamental to an intelligent approach.

In missed opportunities to positively influence an audience, we often see this Big boss command and control attitude portrayed in the story line of novels and movies. 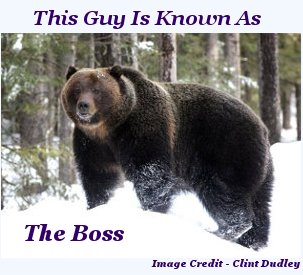 In these novels and movies, Big boss acts the role of a hero. Big boss yells, rants, and threatens his or her subordinates, demanding instant results.

These subordinates dutifully scurry off in all directions and, magically, produce the demanded results.

If only it were this simple and easy.

What happens in real life is the subordinates scurry off and plot how to confound and undermine Big boss. Further compounding Big boss's already considerable relationship woes. Sadly, Big boss is none the wiser.

A still common, though gradually losing acceptance, form of business management, Command and Control, adopted, complete with all it's flaws, from the Military, results in mediocre performance and mediocre, inadequate, products and services. Based on the belief that the more senior the position the greater the influence one wields, executed by mere demand, is all one needs to make things happen.

Thankfully, widespread education, particularly in the guise of Personal Development, is spelling the demise of this, and many other, forms of domination.

The Command and Control style of management doesn't hold a candle (markedly inferior) to a thoughtful system of workplace cooperation based on willing input where all workers, no matter the rank, are privy to decision making in general, and participate in decision making where it directly affects them personally.

Not merely work-wise, but including their well-being and the well-being of those whom they are responsible for. Paving the way for stupendous achievement. And, eventually, a genuine Commonwealth.

Ironically, to it's credit, in a demonstration of genuine leadership, it is the Military in Democratic Nations, which, in an outstanding, refreshing, and inspiring display of amelioration by enlightened thinkers, is sharing center stage with similarly enlightened Companies.

Operating in a climate of deliberate open-minded sharing, these sapient, enlightened thinkers, are forming the vanguard trail blazing the way to a new era of cooperation and the eventual demolition of an angst ridden, trouble causing way of doing business that delivers considerably less than satisfactory results.

Following a pattern of interactive behavior clearly expressing a new, but deep, comprehension of Human Nature, this is progressive activity that deserves every grain of support we can offer.

Commercial Companies – or in other words, groups of individuals with a common purpose – who heed, assimilate, and implement the excellent example set by this vanguard, are well on the route to earned, and therefore deserved, success. Whatever endeavor they decide to commit to.

Ultimately, however, just as the weakest link in a chain determines the chain's strength, the integrity of the individual is paramount to achieving harmonious workplace cooperation.

Next - The importance Of cooperation