Open Source Sharing holds the promise of, and the key to, resolving manyof the  Human race's woes. 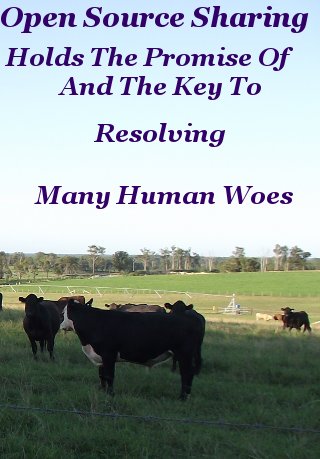 Knowledge per se, and it's practical application to improving Humanities material and spiritual well-being is the reason we are not still residing in caves.

But the dissemination and use of this knowledge has been anything but a dream run.

The base, avaricious mindset of a relatively small number of our fellows, saw power and material gains in taking advantage of their brothers and sisters.

These greedy minds domination of others lives, enslaving them, both physically and mentally, placed an inordinate burden on the speedy propagation of knowledge.

The lack of knowledge places any individual in the same situation as a working animal. That is, easily controlled by, and at the mercy of a tyrannical personality.

This has been the disturbing and disquiet psychological state of Humanity since we developed the aptitude to travel in a bipedal fashion. Releasing our forearms and hands to perform useful work.

From the beginning of Human history, non thinking tyrants have capitalized on this sorrowful psychological state.

Almost six hundred years ago, around the same time money began flexing it's to be considerable muscle, Johann Gutenberg's printing press shattered this spell, liberating the Human spirit and sense of enterprise in much the same way as does Open Source sharing today. 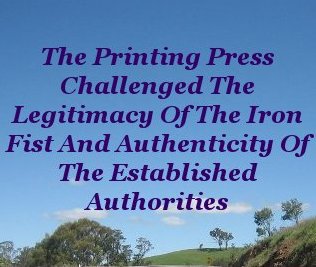 Gutenberg's new Printing Press challenged the legitimacy of the iron fist, and the authenticity of, established authority. No longer could cool inquisitive minds be treated like mushrooms and kept in the dark.

A sound logical mind may reason that this freeing of the Human Spirit, amidst an explosion of knowledge sharing would set the stage for peace and prosperity.

Encouraging and inspiring people to work together in Harmony, basking in the restful glow of contentment derived from the quiet satisfaction of employing the effectiveness of cooperation and collaboration.

The sound logical mind of the day was set to be, and remain, profoundly disappointed.

While, along with bitter disappointment, the intuitive mind experienced a high degree of consternation at the behavior that caused a missed opportunity for Humanity to free itself from the shackles of ignorance.

The Human Spirit may have been freed, but along with this freedom came the temptation and opportunity for the individual to mimic the authorities repressive avarice and lust for power over their fellows.

All bad behavior, born of ignorance. The dark side of Human Nature was going mainstream.

This is the world of unaware, unrestrained Human desire.

In an effort to arrest and contain rampant counter productive and often capricious behavior, fledgling Copyright and Patent Laws appeared and soon were taking full flight. Seriously dampening and checking the use, if not the possession, of knowledge. It could be argued that is one and the same.

Reflecting the above mentioned sadly avaricious attitude, and so often non thinking approach to life, the patent system in particular was, and still is, abused. Either mischievously or corruptly. Putting at a distinct disadvantage all honest applicants seeking protection of intellectual property in a spirit of faith and goodwill.

The difference between closed and open source knowledge is essentially an issue of freedom. 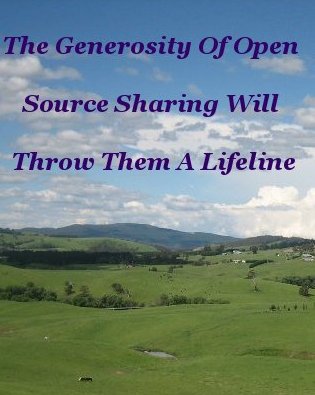 Prescient leaders in all walks of life, recognizing the tremendously genuine benefits of unity, amity, and open source sharing, are moving away from the constraining, constricting, and divisive practices of corruption prone closed source knowledge.

Countering this intelligent move, reminiscent of the repressive efforts to control knowledge throughout history, modern day supporters of closed source are ever tightening their perceived grasp on whatever information they can lock up.

Uncomprehending that as new ways to do and achieve things, discovered by open minds and then placed under the generous auspices of Open Source will eventually overhaul and sideline them.

Leaving them floundering in the wake of the impressive power of open source sharing.

Nonetheless, the generosity of open source sharing will throw them a lifeline, which they will be able to grab, and hold, with a change of attitude and mindset.