We Are Losing Our Freedom

Investigating intellectual property rights infringement legislation proved to be a surprise element in my search to find protocols to do the right thing by fellow content creators. 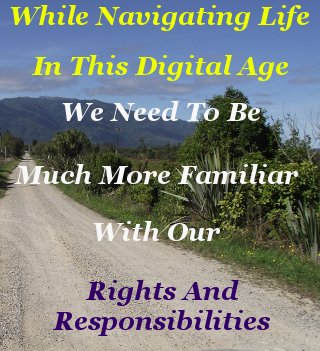 Expecting to find helpful guidelines as to what constituted infringement, and how to deal with it, I found instead a distinct threat to our hard won freedom.

That unnecessary threat assailed and deeply offended my sense of fair play and morality.

We have conventional copyright law which has served us admirably to date and there are no reasons why, with tweaking here and there, it cannot go on serving us in the same fashion, with one proviso.

For our own benefit, in this digital age, we should to be somewhat  more familiar with our rights and responsibilities under our respective jurisdictions.

In addition, it is also in our best interest to be aware of other differing jurisdictions as our on-line activities demand. Until an acceptable worldwide Code of Conduct is established.


Computers Are Hyper Efficient Copying Machines With No Conscience

Our subconscious mind requires one's conscious mind to guide and direct it. So too does the copying machine at the end of our fingertips.

With the portent of big hard-drives all over the world filling up willy nilly with illicit content by those unguided and misguided fingertips, the  DMCA was brought into existence.

The DMCA legislation originating in the United States, and introduced to address this specific problem copyright faces in the digital age, has run roughshod over conventional copyright law. Contradicting, and at times circumventing it. As though it does not exist.

Far from concern for the rights of the original creator, and dissemination of knowledge, as does conventional copyright, these digital age laws lend themselves to the adoption of a business model designed along command and control lines. This is already reality.

This command and control business model is a dangerous track to be following.

The original intention of the DMCA law making may be merely to have a captive audience that fills corporate coffers with dollars from unresisting consumers. But it leaves the gate wide open for totalitarianism to walk right in. Unopposed. 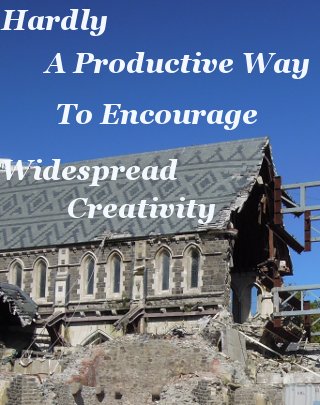 Intellectual property rights, and draconian legal enforcement of those rights, is based in absurd, questionable platforms such as DRM and Trusted Computing.

This not so modern-day malady has serious implications to loss of intellectual independence that will eventually reverberate throughout the world. And plunge us into a pitch darkness where it will be next to impossible to take any form of creative initiative.

Hardly a productive way to encourage widespread creativity, to benefit society, as the enforcers of intellectual property rights infringement claim it to be.

We are entering an unavoidable, increasingly mechanized technological Age. Conventional employment opportunities are disappearing across the whole of Society. Never to return.

While job loss is perfectly normal - it has been happening since we settled into communities - this is the first time the whole of Society has been affected.

The industrial trend has always been a compounding of job creation. A former industry disappears, along with it's associated jobs. The lost industry's successor not only replaces those lost jobs but offers more and better ones.

This trend will continue, but with a striking difference to the past.

If our legislators strangle Creativity by tying intellectual property ownership up in knots it will effectively strangle job creation.

This type of enforcement has little to do with protecting intellectual property and doing the right thing by each other. But has everything to do with remote control of the individual. Placing him or her in a straight jacket of do it our way or perish. Posing a mortal threat to not only creativity, but also to our liberty as Intelligent Beings.


Legal Does Not Always Equal Moral

With Humanities well-being foremost in mind, as a  truth-seeker I feel I must speak frankly and candidly.

Our well-being does not come about by fortuity.

It comes about by implementation of knowledge, and awareness of the consequences of our actions, in a sane manner, both economically and socially.

The Freedom to work in a benign environment is essential to wholesome creativity. And a contented, productive society. Immoral legislation will never achieve a contented, or productive, society.

Instead, it will provoke an eventual backlash that will scatter and crush the oppressors in it's wake. Dragging them deep into the black chasm they created for their victims. History predicts this fate, by endlessly repeating itself.

There is no doubt that Intellectual Property Rights infringement is a serious threat to the economic stability of the Internet. And indeed to National economies. Particularly in the realm of counterfeit.

But mere legislation is failing us. And while ever a lower plane mindset prevails, it always will. Particularly if that mindset is drafting, or is influencing the drafting, of that legislation. Which obviously it is. 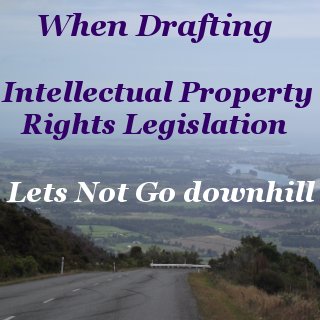 Ad hoc as well as organized intellectual property rights infringement needs to be not simply curtailed, but ideally prevented.

Without posing a threat to the stability of a creative society. The only way this will happen is when potential offenders decide it is not cool to cheat their fellows.

Seeing others as real, living, Human beings and treating them as an opportunity to interact with for mutual benefit, instead of opportunities to reap ill gotten gain will help tremendously to this end. This applies equally to providers of product and consumers.

Change the lower plane mindset and the problem is solved. If we don't focus on this solution then we will be playing a game of insane, tail chasing chaos, where the Good guys and bad guys suffer equally.

Fueled by draconian, brutish legislation. And profit destroying retaliation.
The afore mentioned straight jacket is already off the tailor's cutting table, being fitted, and stitched up tight. I feel the constrictions, do you?

Next - Time For A Change

Return To Return To pdThinker.com