Control Definition
Is Not Well Suited To Personal Development

Control Definition - Power or authority to check or restrain; restraining or regulating influence; superintendence; government; as, children should be under parental control -
[1913 Webster] 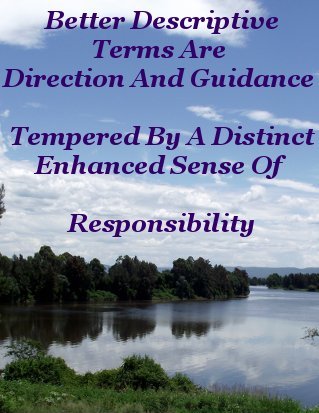 As much as the term control is used in relation to Human behavior, including Personal Development, it really belongs to the discipline of Mechanics.

Particularly to machine construction where specific tolerances within definite, fixed parameters, with no allowable deviation are not only necessary, but crucial for a machine or system to perform adequately.

Or where rigid checks and restraints are considered both legitimate and appropriate by sane rational minds.

Human behavior, in contrast to machine behavior, is dynamic and fluid. Better descriptive terms are direction and guidance tempered by a distinct and enhanced sense of responsibility. Terms that allow for a mindset that integrates the equally necessary measures of variable tolerance and flexibility.

Humans too, are machines, except, we possess powerful emotions. We are alive! Machines with emotions require a radically different approach to operation than those machines without emotions.

Taking charge and directing these emotions is Personal Development on the highest plane. The end goal being productive Good. Ultimately building a powerful personality that purposely Harmonizes with other minds and any given environment.

It is here on this plane of Harmony that the full extent of the power of Spiritual Intelligence is accessed.

Spiritual intelligence can be applied from this plane for the benefit of oneself, and Humanity in general.

Anger, whatever the source, can be transmuted into a stimulant to inspire the Subconscious Mind - via Spiritual Intelligence - to deliver truly outstanding solutions to problems. Instead of indulging in the lower plane thinking of revenge and destruction.

Or, as we often witness, surrendering - in despair - one's right to solve our problems by submitting to coercion. Or worse, by giving up.

Understanding and implementing Direction and Guidance allows the Mind to becomes a Hero. Rather than a frustrated bystander or helpless criminal.

A demonstrable, vastly superior utilization of Human Intelligence than that permitted within the rigid confines of either authoritarian rule - where-ever it may be encountered - or self imposed suppression of ones emotions.

As implied by the definition of control.

Human emotions can be unpredictable, for the very reason most of us have been pressured to discipline ourselves in the above mentioned control definition. Leading to suppression of our emotions. This habit, just as in a damned river, is not natural. And when overburdened poses the threat of bursting its containment. 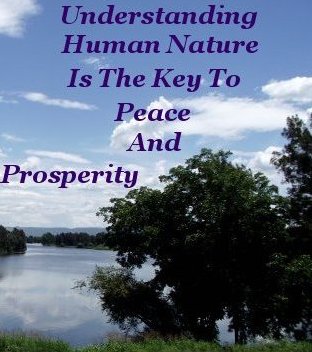 She also provides warning signs that indicate when a person under emotional stress is about to lose it.

These signs though, are often so subtle that they can be either ignored, or not recognized in the first place.

The resultant, frequently socially unacceptable behavior, is then used as a reason, generated by fear in the minds of members of authorities, to implement ever more Draconian measures. In a vain attempt to suppress and keep in check the resentment, bitterness and hostility rendered by that authority's lack of understanding of Human Nature.

And in particular their lack of comprehension of how to harness and exploit the immense potential power inherent in every individual mind.

This lack of comprehension is widespread not only in authoritarian regimes but in Human Relations in general. Gaining an understanding of Human Nature is the key to peace and prosperity and can be found in the domain of Personal Development.

Using control as in the control definition above, in relation to Personal Development, is reminiscent of police state mentality – a sick affliction on Human advancement and intellectual freedom. Prompting and promoting mental suffocation.

Much Human activity, in the past, involved individuals attempting to control and dominate others.

This desire to dominate has essentially generated the Political Systems we are compelled to live under. Systems ranging from somewhat enlightened Democracies, where the Populace at large enjoy a type of limited freedom, to despotic regimes where the Populace endure unimaginable hardship.

Unimaginable hardship at the whim of a despot.

Doing a thing your way in a responsible manner unshackles and inspires your mind in readiness for creative thinking.

Rigid control, either self imposed or enforced by others tends to shut down the creative process and turns the mind to nefarious thoughts. Evidence for this can be found wherever Humans congregate. 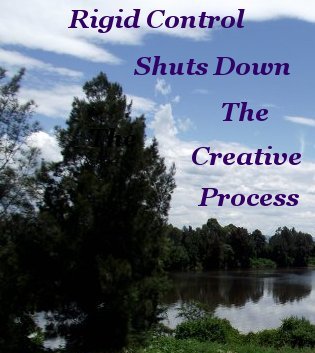 The disruptive consequences of misuse of control, from the individual in a personal sense, to authorities formed to administer collective Human affairs  - Associations - Workplace - Government - is evident in every Nation.

There is however, a glimmer of hope on the horizon wherein some Authorities in some Nations are beginning to recognize that absolute control over a Populace is not only counterproductive, but entirely self defeating.

Likewise the workplace and associations.

These Authorities are laying the right foundations for a harmonious future to eventuate. Restoring dignity, freedom of spirit and freedom of choice.

In the process cultivating not only economic opportunity, but opportunity in any sphere where the individual allows his or her mind to travel.

Restricted in the present to their own constituencies and jurisdictions these Enlightened Administrators are at the same time role models for the rest of the world.

Leading by example, not interference.

Working within the Laws of Personal Development we can direct our thoughts with calm freedom.

We can reflect on our ability to direct our thoughts comfortable in the wise knowledge that we are evolving, and abiding by, a moral and ethical code of conduct that neither permits nor tolerates harm and disadvantage.

Either to our fellow travelers or the Natural Environment which generously provides every material benefit we enjoy.

With an enlightened populace and equally enlightened Administration free of rigid control, the future holds promise without fear.

Rigid Control Does Not Rock!

Return To The Power Of Words

One may believe control to be necessary in wider society because of the primitive nature of much of Humanities day to day thinking. When this primitive thinking is switched to higher plane thinking we will be free.