Collaboration And Democracy
An Opportunity For Peace

Collaboration and Democracy are waiting patiently in the wings, on that stage we call life, for us to recognize the opportunity these two Principles offer Humanity. Opportunity to build the Planetary Utopia that genuine sharing across all Peoples and Nations makes tangible and achievable. 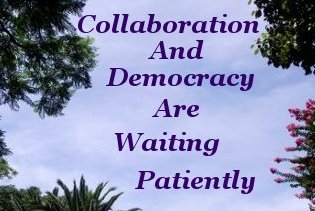 Humanity has dissipated in excess of ten thousand years to reach a point in our evolution whereby the opportunity presents itself to establish true equality for the Human Race.

An excruciatingly long time. But a huge shift in the conscious awareness of our Human Intelligence has emerged, compared with our early forebears.

Our Forebears, who irretrievably squandered two million years from the initial glimpse of the Power at their disposal. Their ignorant neglect to take charge of their Thoughts facilitated the future shackling of the Mind of Humanity to the whims of deranged despots.

Humanity currently has a window of opportunity to change the World from one of subjugation to one of freedom and responsibility.

If, as a species, we decide to accept this rare opportunity to collectively liberate our Minds, in both the Spiritual and Physical sense, modern Human Beings will be able to claim we are two hundred times quicker witted than our Stone Tool using predecessors.

That opportunity, for freedom, equality, and responsibility, while with us now, will be fleeting. Appearing in the guise of technology that can be used for Good, to forever free ourselves. Or used for evil, to ensnare and eternally enslave ourselves. At the pleasure of a few despots.

Collaboration and Democracy offer two Tools to the Workshop of a liberated mind. These two Tools, on their own, are adequate to vanquish subjugation. With the qualification they must be well understood by practitioners.


It's All About Knowledge

Knowledge is the antecedent of Technology and comes in two flavors. Open Source, and Closed Source. 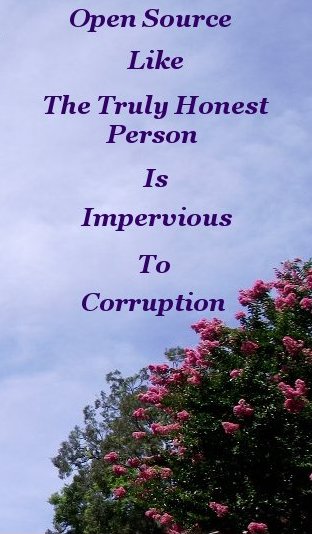 Posited on the side of Good, aligned with Collaboration and Democracy, is Open Source. This desirable flavor is fast gaining traction and widespread acceptance as the enormous practical benefits and self regulating aspects have become better understood.

Open source, like the truly honest person is impervious to corruption.

If corrupted, it is self healing. For the simple reason no individual can wield undue influence.

Particularly in reference to Open Source Software. If a Code contributor makes a mistake, or a malicious mind purposely attempts to inflict injury, it is swiftly noticed and rooted out by knowledgeable individuals.

Malicious behavior will prove to be of mere unprofitable nuisance value. Now that is genuine security. Via this productive form of Sharing, we can be our own providers of freedom from anxiety and the unnecessary fear of our estranged fellows who indulge in ignorant corruption.

While not in itself inherently evil, the Closed Source flavor of knowledge readily lends itself to practices that are evil.

Closed source regulation of knowledge was initially a well meaning effort to advance Human well-being that probably created as many problems as it solved. The temptations offered by lower plane Thinking throttled the fair minded intentions that were meant to prevent theft of intellectual property.

The fleeting opportunity for genuine Freedom, mentioned above, abides latent in the positive hope that ready acceptance of Open Source Knowledge can race ahead of closed source. In the process accelerating the demise of this once useful, if flawed, institution.

Closed Source, with it's many disadvantages to the majority, is no match for it's magnanimity inspiring counterpart.

If working in Harmony alongside Open Source, and Personal Development, Collaboration and Democracy has the potential to change the World to the way we, the majority, expect it and want it to be.

Money and Power lose their influence to corrupt when Human Minds are functioning at higher frequencies and focused on Good. Particularly the Common Good. 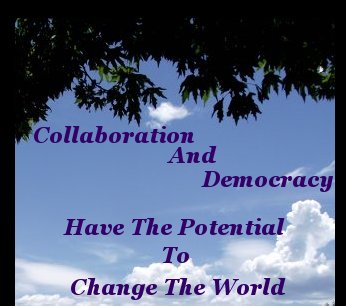 Open Minds and Open Knowledge impose no restrictions on input or output. Evil becomes redundant under these circumstances.

Everyone, from great great grandparents to preschoolers, can share information gleaned by Empirical or Intuitive means.

Every Human Being can enact an important role in contributing to constructing a culture of collaboration in Human affairs. Otherwise known as a culture of sharing. A World Wide Democracy, where evil is redundant, where Humanity per se is on the path of Enlightenment.

The very act of Sharing interest, knowledge, and information between collaborators is both a motivator, in the form of mind stimulation, and reward for effort.

The evidence for what can be achieved, when we pool our Mind-Power, and resources, is not merely breathtaking, it is ubiquitous. We can gain strength and inspiration from each other and those who preceded us. wherever they may be. In return we can give much appreciated encouragement via the Desire to Listen. And Understand.

Those few individuals, relatively speaking, who do not believe in promoting Collaboration and Democracy - believing instead that they can obtain and retain control - Whether over people, resources or process, will be the prime retrogressive influence on the bright future that Open Source Sharing offers Humanity.

And, eventually, if these narrow minds insist on selfishness, they will be the biggest personal losers.

This author invites you to purposely and consciously focus on Harmony and enthusiastic Cooperation.

Doing so no matter what is happening around you. And if a collaborative opportunity comes your way, embrace and enjoy it with the same healthy attitude.

You will be adding to your own joy and to the joy of the world.

Collaboration and Democracy, Open source knowledge, and Personal Development, are some  of the Tools we can use to genuinely secure our collective future.

A far cry, indeed, from stone implements. And violent behavior.