The Human Brain Structure Is Possibly Nature's
Most Admirable Accomplishment

The Human Brain structure is quite possibly Mother Nature's foremost admirable accomplishment. if a touch enigmatic. You are studying the most complex construction, that we are aware of, in the Universe. In being so complex, our Brain demands much attention and concentration to understand it.

When my capacity to understand - anything - is challenged, I recall Ralph Waldo Emerson's wise observation . . .

How calmly and genially the mind apprehends, one after another, the Laws of Physics!

Then I go about calmly and genially apprehending whatever the subject may be that threatens to confound me. With Emerson's observation in mind, let's show the Brain who is in charge.

In an attempt to make them familiar I have bolded the descriptive terms belonging to the discipline of Neurology.

Your Brain (Encephalon) is the concentration (Cephalization) of your Central Nervous System at the top of your Spinal Cord, consisting of subsystems that evolved consecutively over hundreds of millions of years.

The first part of a Human Embryo to form immediately after conception is this central Nervous System.

Embryonic cell division then constructs a Neural Tube, shown above in green, from which originates the three Primary Divisions of the Brain, and is recognizable as a Brain and Spinal Cord a little after one month.

The following two images emphasize the phenomenal growth of the Human fetus in such a short time span as two weeks. 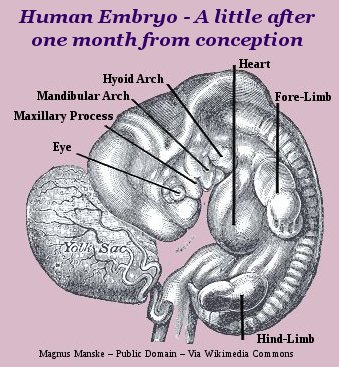 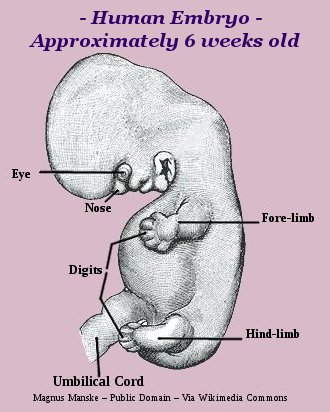 
These three Primary Divisions of the Human Brain originating in the Neural Tube shown in green, in the top image, grow and expand to become the Brain structure, as follows:

The Proencephalon, otherwise known as the more easily remembered Forebrain, is composed of two divisions. 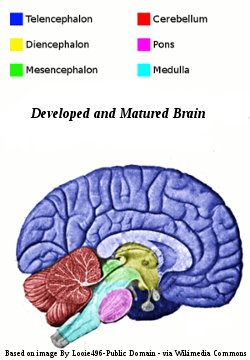 These two divisions are respectively referred to as the Diencephalon and Telencephalon.

The Diencephalon, is also referred to as the Thalamencephalon or Interbrain.

The Thalami, along with the Pineal and Pituitary Glands, or Bodies, are considered to be part of the Diencephalon.

TheTelencephalon develops and matures into the Cerebrum, which is Evolution's most recent addition. And by far the largest segment of the Human Brain structure.

TheTelencephalon is also the most advanced component of our Brain and just happens to be this author's favorite element. Because it provides us with the mechanisms to take charge of our personality - via our Thinking ability - and behave in a civilized manner while we go about the business of achieving our personal and collective aims. In an enlightened manner.

It is this segment of the Brain and it's major function, the ability to process information - in an enlightened manner - that pdThinker.com is most focused on.

The Midbrain, that beak-like tip of the Brainstem is the connecting link between the Forebrain and the Hindbrain.

This is probably the easiest part of our Brain to remember! 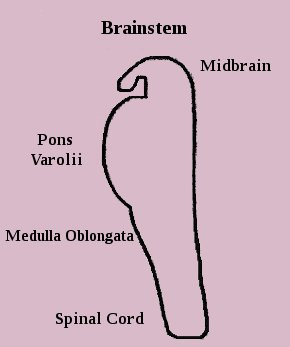 The Evolutionary earliest subsystem of the Brain structure to develop was the Brainstem, composed of the Midbrain, Pons Varolii and Medulla Oblongata. Humans share this primitive structure with most other creatures.

The Pons Varolii is a small swelling towards the top of the Brainstem, connecting the Midbrain to the Cerebellum and the upside down pyramid shaped Medulla Oblongata, which merges with the Spinal Cord.

The Spinal Cord conductive pathway is constructed in a similar fashion to the Cerebral Cortex. Composed of a core of of Grey Matter encircled by White Matter, it also consists of bundles of nerve cells that carry messages to and from the Brain to every part of the body.

In conjunction with the Cerebral Cortex, the Spinal Cord provides a protective distributive highway for, and completes, the extensive physical circuitry of the Human Central Nervous System. 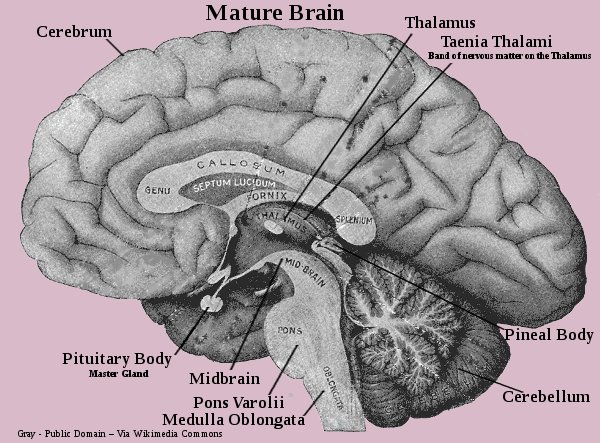 The Hindbrain is constructed from the Cerebellum, Pons Varolii, and the Medulla Oblongata.

The Cerebrum is the most highly developed part, and forms the bulk, more than eighty percent, of the Human Brain structure.

As a motorcyclist's helmet covers the exterior of the wearer's head, the Cerebrum envelops the entire Brain. Except for the Cerebellum. The Cerebellum is tucked beneath the  Occipital Lobe. 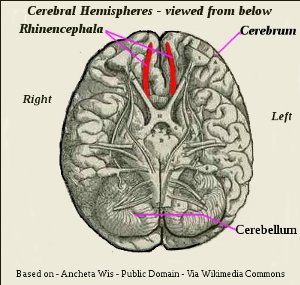 The Cerebrum is composed of two Cerebral Hemispheres, left and right, detached longitudinally, but connected at the base by a mass of Nerve Fibers known as the Corpus Callosum, (Latin for callous body), the means by which the two halves communicate. Each half controls the opposite side of the body.

The Telencephalon is further divided into the Rhinencephalon, housing the Rhinencephala, or Olfactory Bulbs, - sense of smell - the Corpus Striatum, of which the Basal ganglia form a part, and the Neopallium (Neocortex)

In conjunction with the Cerebellum and Basal Ganglia, the Cerebrum is involved with all voluntary bodily action.

The most ancient part of the Telencephalon, the Rhinencephala, depicted by red stripes in image above, are rudimentary in Humans compared to other animals. However this does not appear to detract from a keen sense of smell, as anyone who uses their nose in a professional capacity will attest.

Maybe, the skill of odor detection and discrimination, like all competent use of the Brain, lies in awareness. This should give us hope for the civilized development of our Neocortex, the most recent part, which is delivered to us already at the evolutionary cutting edge.

The Neocortex is an expansion, or thickening, of the Cerebral Cortex, permitting greater Quantity and density of Neurons. Once again, where we find Neurons, we find potential intelligence.

It is how we use this part of the Brain that defines us as Human Beings and by extension, individual Human beings. This mighty apparatus is the core of our Voluntary Nervous System, grounded in Free Will.

Next – Life Would Not Be As Exciting Without These