Cerebral Brain Lobes Are Major Subdivisions Of Our Greatest Asset

Without our Brain Lobes life wouldn't be quite as exciting as it is. Let's undo a few bolts and have a closer look to find out why. This is an excellent opportunity to make special note of the well known fact that every Human on the Planet possesses a copy of this mechanism we call a Brain. 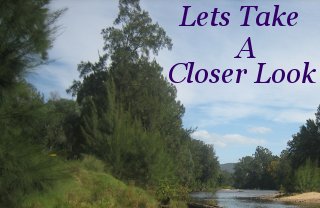 What does not seem so well known is the fact that this amazing center of potential intelligence can be placed under an individual's direct influence. Our potential intelligence is so malleable that it can be shaped to reflect and implement the abilities and capabilities inherent in our genetic makeup, to whatever degree of proficiency one desires.

It is also edifying to note at this stage - and keep at the forefront of our conscious awareness - the wisdom implicit in that insightful Irish proverb domiciled to your upper right.

It is this sameness and difference that has enabled Humans to survive and colonize the Planet as successfully as have the Grasses. Or indeed, Locusts. Regrettably, it is the misinterpretation of the right to Autonomy in our sameness and difference that has prompted the horrendous upheavals Humans have suffered throughout history. Misery that cannot be alleviated via our current approach to life and behavior.

Even today, living in the Age of astonishing Technical achievement, Communication, and widespread formal Education, this misunderstanding remains the ultimate cause of our woes. It is the prime reason we are so seemingly impotent in our efforts to resolve the self inflicted misery that engulfs us and threatens to inevitably lead to our demise as a species.

Notwithstanding Humanities astonishing technical prowess, technology has not provided any resolution to the behavioral predicaments we allow ourselves to occupy. Yet resolution of problems in any dimension is to be found in the same source that is as available to every individual as is the oxygen in the air that we breathe.

That source of problem resolution - any problem - is Thought.


Thought To The Rescue

When we combine our knowledge and comprehension of Natural Law with our skilled manipulation of the aforementioned malleability of our potential intelligence, we can create a steel trap mind that contributes - in our own way - to extricating Humanity from the morass of unnecessary conflict we find ourselves in.

A steel trap mind is available to any Human who is prepared to apply the requisite effort demanded by Nature. Such a mind is built via knowledge - founded in Natural Law - and the power of Thought.

pdThinker.com is dedicated to investigating the power of Thought and warmly welcomes fellow travelers.


The Four Brain Lobes Of  The Two Cerebral Hemispheres: 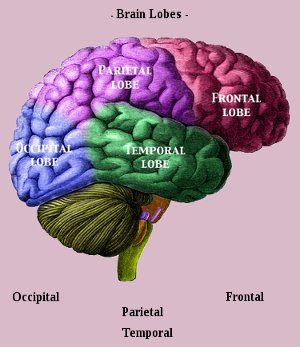 The Cerebral Hemispheres are divided into four pair of Lobes by Fissures, deep, narrow openings given wonderfully romantic names such as the Fissure of Sylvius, which separates the Frontal and Temporal Lobes.

Or the Fissure of Rolando, separating the Frontal and Parietal Lobes.

The remaining Lobe is known as the Occipital Lobe. This lobe is all about vision, in the physical sense.

The four Lobes of each Hemisphere are named in reference to the position they occupy in the Cranium. (Skull) 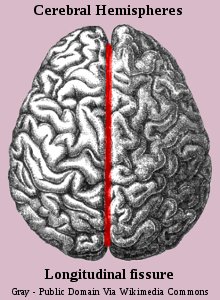 In addition to performing their main function of keeping the four Lobes separated, the Fissures also serve to increase the surface area of the Brain. The greater the surface area the more Neurons can be packed in.

The more Neurons that can be packed in to the available space, the greater the potential intelligence efficacy.

It is this potential intelligence that Personal Development is vitally interested in. 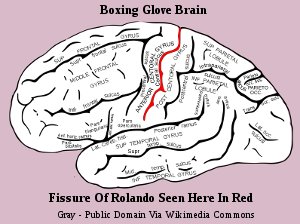 Used here to illustrate the depth of the Fissure of Rolando, highlighted in red, this image of the Human Brain can also serve as a gentle reminder that whilst outwardly it may resemble a boxing glove, it packs an infinitely more powerful problem solving punch than any violent fist. 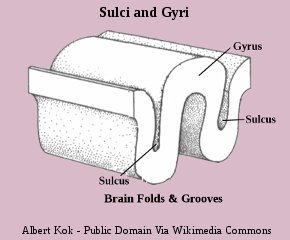 The folds of the Brain Mass constituting the Lobes, are termed Gyri. The groove on either side of a Gyrus is termed Sulcus, and as with Fissures, Sulci serve to increase Brain surface area.

Gyri and Sulci are the plural form of Gyrus and Sulcus.

A Sulcus is formed from a fold and is not as deep as a lobe separating Fissure.

Representing the better part of half the Cerebrum, sit, appropriately, at the foremost or Anterior position of the Cranium.

These Frontal Lobes, of which the Prefrontal Lobes form a part, are engaged in the higher Mental and Intellectual aspects of Being. Including Conscious awareness, self awareness, Conscious thinking, intuition, guiding of emotion, personality, imagination, reflection, concentration, voluntary action, speech and language.

Perched above the ears, containing the Primary Auditory Cortex, is the sound processing center of the Brain structure. Other duties involve assisting the Occipital Lobe to form images, and it also plays a part in Memory, Language, and Semantics.

Situated behind the Frontal, and above the Temporal Lobes, in each Hemisphere, the Parietal communicates with every part of the body via the Somatosensory Cortex, which shares it's location alongside the Fissure of Rolando with the Motor Cortex. Rolando is also dubbed the Central Sulcus.

Commonly known as the Visual Cortex, located at the rearmost, lower, part of the Cerebrum, near the Occipital Bone of the Cranium, basks in the importance of the sole role of taking care of everything ocular.

Even though processing vision appears to be the Occipital Lobes' only function, it executes this function with much interaction with other parts of the Brain.

The Term Somatosensory refers to communication between the Body and Brain. This electrochemical phenomenon takes place without our conscious input or awareness, at breathtaking speed. 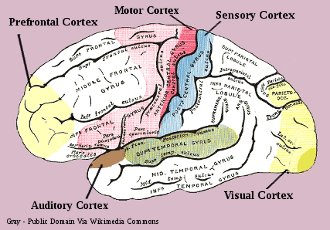 Somatosensory also refers to the Sensory Systems that relay any of the type of sensations and feelings mentioned above, from any part of the body, via the Peripheral Nervous System, to a specific area of the Somatosensory Cortex, dedicated to that particular body part.

The Motor Cortex is on call to stimulate any of the muscles involved in executing voluntary movement.

In common with it's Sensory Cortex neighbor, it too, has an individual dedicated region for every part of the body it is in communication with, and, likewise, executed via the Peripheral Nervous System.

In addition to performing their specific Motor or Sensory function, each of the Brain Lobes form part of an immense association network that combines perception and experience into a presentation that we can - hopefully - make sense of. It is this associative networking that gives us, as individuals, an integrated view of our Environment.

An environment founded in our - individual - interpretation and comprehension of the implicit wisdom offered by an observation, made by an alert mind, sometime in the dim past.

Who said life was complicated?

Return to The Human Brain