Continuing our Human Brain structure tour, we get to meet more components of Nature's Masterpiece. She is ever ready to impress and satisfy the inquiring mind.

The Cerebral Cortex is the pink colored, outer-most layer, or crust, of the two Cerebral Hemispheres composing the Cerebrum. 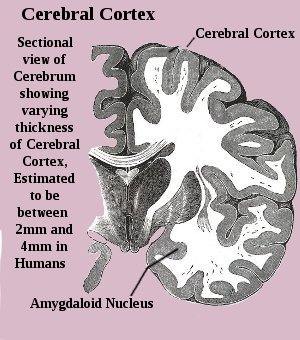 It is worth noting that a small number of our fellow creature's Brains, such as Whales and Elephants, are not far behind the Human Brain in Neuron density.

Accounting for approx forty percent of the Brain mass weight-wise, the Cerebral Cortex is subdivided into areas and labeled with their own designation of Cortex.

These subdivisions are designated according to their currently detected function, such as Motor Cortex, or Visual Cortex.

Not always appreciated as such by some members of our species, the Cerebral Cortex is considered to be the seat of intelligent behavior. This absorbing component of our Brain has connections, via our Nervous System, to all parts of our Body.

Our Mini Brain, the Cerebellum, resides comfortably just beneath the Occipital Lobe. One of the four cerebral lobes of our main Brain structure. 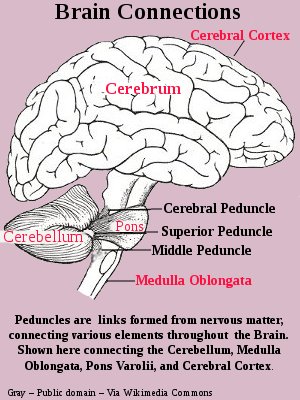 With connections to the Pons Varolii, Medulla Oblongata, and our Cerebral Cortex, the Cerebellum is involved in all voluntary muscle movement, via sensory feedback.

The Cerebellum maintains bodily equilibrium, that is, our physical balance, by subconsciously coordinating muscle movement.

Incorporating this subconscious influence, learned physical skills and repetitive actions, memorized by, and recorded in the Cerebellum then become semi-automatic.

These learned physical skills and repetitive actions require little or no Conscious thought. Unless you want to improve on a particular skill.

The Cerebellum, saturated with Neurons, comes fully equipped with it's own Cerebellar Cortex, which is increasingly being associated with Cognition.

The Basal Ganglia, in common with the Limbic, and other, subsystems of the Brain structure, are a formation of Nuclei in communication with several Brain regions.

In conjunction with the Cerebellum and Cerebral Cortex, principally the Motor Cortex, the Basal Ganglia complete the subsystem that controls physical movement.

Unlike the Cerebellum, which takes most of it's cues from the external environment, the Basal Ganglia are concerned with internal cues and feedback.

Primarily involved with voluntary movement at the Unconscious level, the Basal Ganglia are also associated with physical habits. Both the forming of habits and the execution of habits, once formed.

Connections to various other parts of the Brain structure, including the  Prefrontal Cortex and Hippocampus, suggest they may be involved in faculties such as memory and learning, including higher Cognitive analytical activities.

In a continuing display of harmonious cooperation throughout the Brain structure, these three units work in synchronization to achieve their purpose.

The physical skills this accord permits are simply breathtaking.

Nuclei, plural for Nucleus, are assemblages of Nerve Cells, comprised of Gray Matter, or Gray and White Matter, varying in size, shape, and complexity, and having distinct functions. Typical examples being the Basal Ganglia, and Amygdala.

Distributed throughout the Brain structure and Spinal Cord, and elsewhere in the body, they constitute a vast communications system. 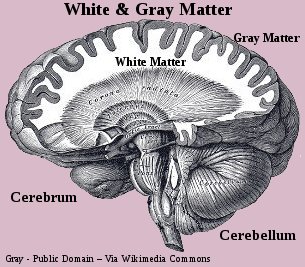 Gray Matter is composed of Neurons, (Nerve Cells) Glia, (support cells), Capillaries, (the body's smallest blood vessels) and Neuropil, the intricate network of connections formed from the Unmyelinated Axons, and Dendrites, of Neurons, along with Branches (Dendrites) of Glial Cells.

White Matter is comprised of Myelinated Neuron Axons emanating from the Gray Matter, and Glial Cells. White matter derives it's description from the sheaths of Myelin encasing these Axons, which is, um, whitish. White matter contains more nerve fibers than gray matter and hence greater amounts of myelin.

Myelin is a fatty substance, that protects, and insulates, the Axons. Appreciably increasing the speed of electrical signals within the Brain, and to and from the Brain, involving whatever destination, around the body.

Neurons Transmit and receive information via Electrical and Chemical signals, and form networks with each other from various parts of the brain, building and dismantling these networks depending on the individuals Thought Patterns. 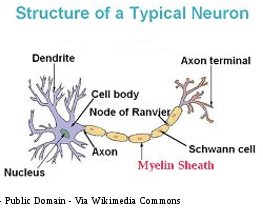 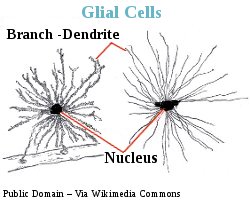 The more Dendrites a Neuron possesses, the more intricate the communication network it can establish with other Neurons, forming the above mentioned Thought Patterns. It is the act of Thinking that generates and promotes Dendrite production, growth, and density.

This author ventures to suggest that this is an excellent time to review and question our repetitive Thought Patterns. Particularly those Emotional Thoughts that underpin our Beliefs and Desires.

Neurons and Glia - plural for Glial - may have much more in common than present understanding appears to suggest. On going research indicates Glia may be implicated in more than mere support, as previously believed. This is exciting news. After being sidelined for nearly six decades, Science is again displaying interest in Glia. 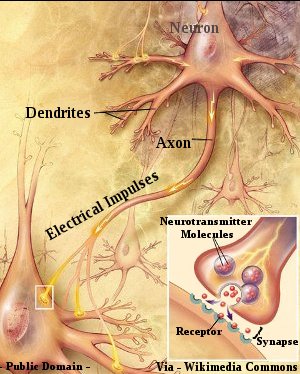 Until recently it was believed that the considerably more numerous Glia merely offered structural and nutritional support for the seemingly superior Neurons. It is now believed that Glia can receive and transmit information signals in their own right. In combination with Neurons, creating Neural connections and networks of an inconceivable magnitude.

Both Neurons and Glia exists as a number of types, with associated various functions. But whatever the statistics indicate these functions may be, the prime purpose of the phenomenal apparatus the combination of these two cell produce, is to process information. Information that can be transmuted into material and spiritual entities.

This apparatus is perhaps Nature's greatest achievement, and every Human on the Planet possesses one. It is the priveledge of each individual as to the use he or she puts this apparartus to.

What are you doing with yours?

Next - The Driving Force Of Your Very Existence