Effective Listening Is A Game Changer


Purpose In This Case Is Threefold:

Both speaker and listener are vitally aware of the danger of losing sight of their purpose. Remaining true to purpose enables Effective Communicators to achieve all three goals. Avoiding the ever present risk verbal exchanges carry of deteriorating into an argument.

On a one to one basis effective listening inspires and encourages intelligent speaking.

On a one to many basis it can change the world. 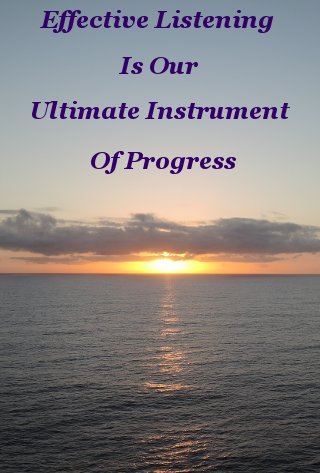 Dialogue is one of the major ways how we Humans get to understand each other. This initially takes time, patience, and much energy. Understanding what another means is not cast in stone. It often takes much interactive discussion before the aha moment is reached.

If we are to communicate effectively, the lesson we must take to heart is that when we stretch our mind to listen with the intention to understand a speaker’s meaning, this understanding must be our sole focus. Applying self imposed filters merely distorts the message, alienates the speaker, and suggests we are mind readers.

Listening is effective when the speaker’s thoughts are comprehended. Sometimes this is clearcut,  immediate, and long lived, irrespective of the complexity of the message being delivered. As is the case of John F Kennedy’s Moon Speech, which is still prodigiously bearing fruit.

Effective communication can also take a lifetime of suffering before a message is comprehended. As was the case with Mohandas Gandhi.

Notwithstanding these two extremes, both men are Heroes. Both lost their life to their cause. Both have left an outstanding legacy to guide you and I along the path of effective communication.


The Context Dialogue Takes Place In Is All Important

While there are no hard and fast rules for effective listening, the context dialogue takes place in determines the type of listening that takes place. There are fundamentals of listening that help to facilitate communication. We learn by doing, discovering what both works for us, and we feel comfortable with.

Discussing a solution to a technical problem is quite different to supporting another Human who is suffering emotionally.

Soliciting information from a Human suspected of committing a crime requires a different approach to someone relating a humorous story. Particularly considering that criminals are mentally disturbed individuals.

On an individual level effective dialogue however, always insists, and depends, on the speaker feeling he or she has been heard, and understood. The speaker and listener are sharing intimacy in time and space.

This intimacy can be extended across time and space infinitely between a speaker, and an audience, of any capacity.


The World Is Changed By Effective Listening

The absolute power of effective listening can be fathomed from the life changing words of the following five influential speakers, where the speaker’s intended goals were manifested in such dramatic fashion, that it is difficult to mount an argument against it.

If any of the following speakers were not listened to, and their words not acted upon, we would now be living in a different World. A few minutes reflection on this statement, allowing your imagination free rein, will reveal the extent of that difference. 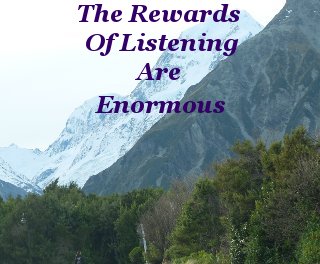 The rewards this focus delivered, and is still delivering, more than half a century later, are extensive, and promise to be endless.

One word is responsible for the steady stream of technical achievement and the prosperity that achievement brings, and secures Humanities future.

That word is Choose. We Choose To Go To The Moon. We choose Good. We choose progress. We choose equality.

This single word is also the foundation rock of Personal Development, as in - I choose to develop my greatest asset. My mind.


Influence Of Radio And Movies

The power of effective listening is evident in Good and evil as depicted above. It is also evident in fact and fiction. On the fictional front you may recall the mayhem caused by Orson Wells – author of the radio production, War Of The Worlds. Listeners believed the Earth was under attack by Beings from outer Space, and panicked accordingly.

During the 1950s, the movie, The Wild Ones, featuring Marlin Brando, sent shock waves around the World inducing people to believe they were about to be terrorized by a gang of bike riding thugs. This belief persisted despite no immediate evidence to support it.

The Wild Ones – a tame theme by today's standards - and the imaginary terror it aroused, spawned the reality of actual gangs of bike riding thugs. Placing a cloud of suspicion over, and fear of, every legitimate motorcyclist on the road, including myself. Who knows what economic damage this irrational viewpoint did to the world wide motorcycle industry.


Fact To The Rescue

The Japanese motorcycle company, Honda, came somewhat to the rescue – as did motorcycle sport and the proliferation of genuine motorcycle clubs - in the early 1960s with their refreshing and welcome advertising jingle, 'The Nicest People Ride A Honda'.

Honda’s innovative campaign moderately reduced the dread evoked by the sound of a motorcycle exhaust. Albeit, it was not until fairly recent times, perhaps coinciding with the passing on of the generation influenced by The Wild Ones, that motorcycles have gained a deserved aura of acceptability.

The resulting behavior we engage in generated by the words of a speaker should be of our own choosing.

Once we, and the speaker, are satisfied with our unbiased comprehension, then we can decide what action is appropriate.


The Choices Are All Ours: 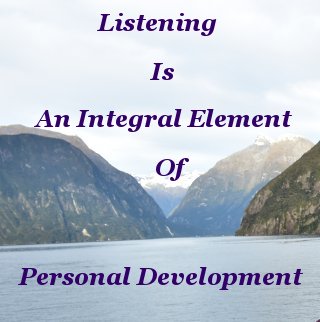 Effective communication is inextricably allied to the power of words, and takes place in an environment of cooperation and empathy.

Whether the consequences are Good or evil, depends entirely on the composite decisions of we individuals.

From the contents of this page alone, we can see that effective listening, inextricably allied to thought, can change the world.

Comprehension of any and every situation is entirely the responsibility of the listener. So true is it - no one can listen for another.

Let's not forget we are in charge of our thoughts when we decide to purposely understand a speaker.