Is Coopetition A  Solution?

Coopetition is a current business buzzword. A hybrid phrase fashioned from cooperation and competition. But the concept is not so new.

This modern buzzword is credited with the  accessible virtues of openness and transparency. Two essential elements of genuine Willing Cooperation. Essential elements frequently missing or abused when attempting cooperative alliances in the past. In the misguided assumption that deception equals lasting commercial advantage.

In today's Business World, coopetition is the practice of participants receptively sharing resources and expertise while at the same time competing with each other for market share.

The practical implications and consequences of applying this practice is of much interest to this Philosophy of Personal Development Thinking.

Once participants in this sharing manner of interaction experience the material benefits, and personal satisfaction, to be derived from up front dealings and conclude first hand that Trust, Honesty, and Integrity simply out gun deception, and selfish advantage seeking activities, willing cooperation will be seen in a new, favorable light.

Coopetition may well turn out to be a transitory path from desperate Competition, to full Cooperation. Leading to a bright future Economy where Creative Collaboration is the Status Quo. 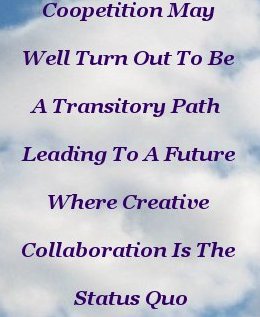 A wholesome economy wherein only optimal products and services are produced in the most economical manner.

Optimal meaning prime quality. And the most suitable for purpose.

A most economical manner includes considering demands on our environmental resources. And the total avoidance of deleterious impacts on this literal and solitary source of our sustenance.

A most economical manner, of producing optimal products as indicated above, would include thorough development of fitness for purpose, before being released for purchase to consumers.

Function would take precedence over bells and whistles that simply increase the possibility of bugs that interfere with utility. A condition that alienates users, is embarrassing, and difficult indeed to successfully recover from.

Alleviating chronic physical and mental stresses and demands placed on the Human beings involved in the process of Concept to Market would be a priority. Liberating their energies to be used in more profitable ways.

Last, but not least, in a sustainable economy, complete recycling or refurbishment at the end of a commodity's life-cycle would be essential practice.

All the above desirable goals can be attained via Willing Cooperation, and, where applicable, Creative Collaboration. Where you find Willing Cooperation you will also find it's companion Principle, Genuine Sharing, amassing profits and satisfaction for everyone involved.

The benefits from this activity of doing the right thing in the right way for the right reasons, are distributed equitably.  Effort merits reward. Greed and selfishness simply do not exist.

A probable bonus could materialize in the form of healthy longevity.

The deepest understanding of Natural Law, by every participant, is a prerequisite to attain a status quo of Creative Collaboration.

Without this deep understanding of Nature's ways, Human Relationships will vacillate between collusion, and genuine cooperative efforts that would benefit all, yet are doomed to failure for lack of this very understanding.

This necessarily intimate understanding of Nature and Her ways that determine and safeguard Sound Relationships, is acquired by immersing oneself in the refreshing philosophy of Personal Development, as a lifestyle.

There is no substitute for doing the right thing. If an individual is not intrinsically ethical then legislation and any other methods to force his or her compliance are simply part of a cat and mouse game. There will always be a fall guy for the uneducated dishonest Human to prey on.

We saw this phenomenon of Coopetition on a large scale towards the end of the second world war. Between Russia and the Western Allies. Coopetition between these armed forces ended the war with Germany and her allies, in favor of the West and Russia.

Following the division of war spoil, disrupting the lives of millions, these two powers returned to their respective Philosophies. Both entities practiced one-upmanship and brinkmanship. Ignoring the lessons the recent violence and destruction they were engaged in, had to offer.

Russia bastardizing the philosophy of Communism, plunging Eastern Europe into the same pitch blackness of violent terror and mistrust that Russia had inflicted upon itself since the introduction of communism a quarter of a century earlier.

The West continuing it's flawed interpretation of the doctrine of Capitalism. Permitting and condoning abuse of this system of Reward For Effort, to the point where the abusers have today submerged the world into economic chaos.

In a cold war of fearfulness, both Philosophies subjected this Planet and it's inhabitants to the knife-edge balanced threat of Nuclear annihilation.

The same deficiency of comprehension of Natural Law, in relation to Humans behavior, that led to this bewildering political dilemma, is quite evident in our current sorry state of affairs.

Contrast this widespread lack of comprehension of Human Nature with our generally lucid understanding of Physics in relation to Technology. 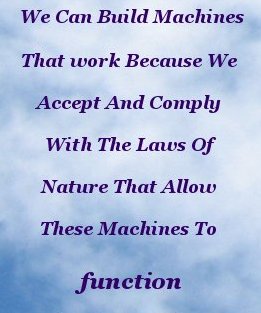 Humans can build machines of all description, that function almost flawlessly.

Because we accept and comply with the Laws of Nature that allow machines to work.

When dealing with our view, and attitude towards, Human Nature, such an understanding is generally lacking.

We cling to the Belief that we are free to force our will upon each other.

Herein lays the lesson that simply has to be taken to heart for Coopetition to be be of any benefit but fleeting.

As evidenced by History, recent and ancient, the price we pay for such a Belief is exorbitant. And unconscionable.
The economic and political messes we find ourselves in today have come to pass because of the aggressive, adversarial, confrontational, and incompetent thinking styles of the men and women we have allowed to lead us.

Coopetition does not hold the answers to Humanities suffering, economic or otherwise. But implemented with a sound understanding that there is more to genuine cooperation than meets the eye, and we are prepared to stake our future on these principles that enable us to be, foremost, Good Humans, then Coopetition will be an important, functional, first step on the road to permanent economic recovery.