How Relevant Is Brain Size To Human Intelligence?


The Jury Still Out On Brain Size

The term, “Brain size,” may suggest that it has a bearing and influence on the intelligence of a given species. That is, the larger the Brain Mass, the more intelligent the organism. 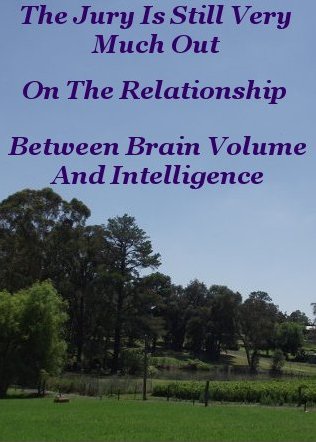 The jury is still very much out on the relationship between Brain volume and intelligence.

There are many other factors to take into account such as body mass, the way the Brain is structured, elements it contains, and, as we will come to see, an influence which is the perhaps most potent in the Universe.

This influence however, is not readily recognized as such, even by Science.

To gain a clearer appreciation of the relevance of Brain size to Human intelligence, we need to speak a little Greek.

We begin with the Cephalon, which is your head, complemented by your Encephalon which is the contents of your head. Known more commonly as your Brain.

Your Brain is the Cephalization, or Terminal, of your Nervous System.

Cephalization is the Evolutionary Driven concentration of Sensory Organs in the one region of the body of a creature. Usually, but not always, this region is the head. Your Cephalon.

The greater the Cephalization the easier that creature can Function in it's environment. And the more functions it can perform.

Encephalization, an expression that to date has not yet found it's way in to many dictionaries, is used to denote a simple relationship between the body mass and Brain Mass of a given organism.

This relationship results in a ratio that allows comparison of Brain size between one and any other organism.

Humans score high on this ratio. So too, do mice and birds.

Human Beings are one part Brain and forty parts body. So are Mice. Small Birds are one to twelve, and Elephants one to five hundred and sixty.

Notwithstanding the conspicuous difference between bird and elephant both creatures exhibit noteworthy intelligence.


What Is Encephalization Quotient?

A more complex calculation and comparison used by science is referred to as the Encephalization Quotient.

Encephalization Quotient can be defined as the quantity of Brain Mass in excess of that determined to be required for an organism's body to function optimally.

This excess Brain Mass then, is available for higher Cognitive functioning.

To calculate this complex comparison requires the introduction of Allometry in the form of an equation. Which I won't mention.

In a nutshell, Allometry, as applied to biology, is that field of science that studies the relative growth of one part or organ of a creature in comparison to the growth of the complete creature.

And how that relates to the creatures Anatomy, Geometry, Physiology and Behavior.

These complex parameters were  incorporated in the non-mentioned equation by German Biologist Otto Snell in the early 1890s. Employing empirically derived inputs. It is still used today.

Biologically, allometry furnishes many useful contributions to science by the way of comparison. And it provides a platform for calculating the energy efficiency of a given Nervous System.

But, due to the ever variable nature of the empirical inputs available, it can only be approximate in predicting how much Brain Mass is available for higher order Cognitive functions. Although it does give a relative idea of possible redundant Brain Mass between species.

Encephalization was a necessary and useful initial measure in comparing Brains across the board. It suggests that excess Brain Mass is available for enhanced intelligence.
Evidence is gathering though, that it will eventuate that the jury will find in favor of the following factors as being the true assessment of Potential Intelligence:

Development and utilization of that Potential Intelligence is another matter altogether.


Something Additional Is Required

From a common-sense, logical viewpoint, it can be drawn that a larger Brain size offers the potential for greater Cognitive ability, but it is only one component. 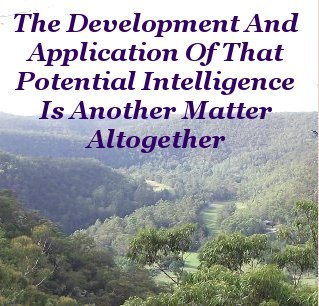 Other elements, such as those mentioned above, are required to be present to establish this Thinking capacity.

And as well as having all these constituents in place, it would appear that something more is required to implement this superfluous to mere survival Cognitive power.

This something extra is freely available to each and every one of us. And can be found in the mind expanding realms of wise Personal Development.

There is yet much to be considered and settled in this cool Brain size and intelligence discussion. So while the jury is deliberating, let's take a look at Brain structure.

Next - Brain Structure And Personal Development