A Most Useful Experience

As an example of Natural Law, by experiencing a violent destructive storm or earthquake draws to our attention, in an acute manner, the Autocratic Power of the entity we depend on for our existence. Nature. 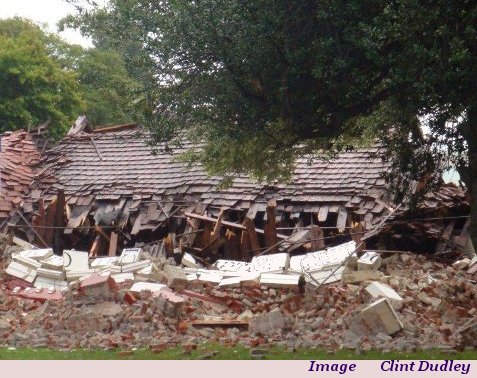 During those brief moments that appear to last a lifetime we acknowledge our helplessness, pleading for tranquility to return.

When tranquility returns, the majority of us resume our preoccupation with our individual struggles. Unaware the source of that awesome power we just witnessed can be tapped into at will and employed to solve problems that obstruct our path.

The recognition that we Humans have the faculties to comprehend and use this mind blowing reality has given us the wherewith to create the World we find ourselves living in.

We can become actively acquainted with this stupendous power by recalling that intense awareness of it during our disturbing experience. Then focus that awareness on an example of Natural Law quietly at work on our behalf.

Visualizing Nature willingly responding exactly to our interpretation of those conditions we are working within, and desire to come about.

Thus converting a frightening situation into a most useful experience.

While Nature Does not negotiate, Her Laws are sometimes - actually often - misinterpreted by we Humans. Mistakes ensue. 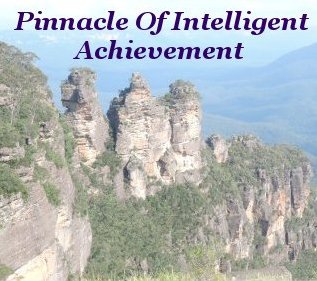 Hence, a clear understanding of the consequences of our actions is an invaluable asset.

This can only come about via a healthy knowledge of just how Natural Laws works. And much deep thinking.

Attaining this lofty ideal will set you apart as someone different.

Embarking on this path requires serious commitment and effort.

While acknowledging the considerable effort required to take charge of one's mind in order to understand Nature and Her Laws . . .

That lofty ideal is what we on the path of Personal Development, otherwise known as mind expansion, hold dearly as the pinnacle of intelligent achievement.

In Physics Natural Law is the consequence of what happens when a Force of Nature is applied to a physical state. 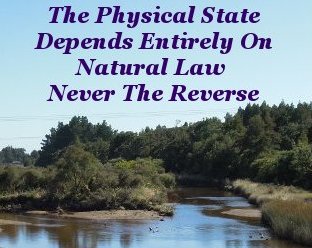 The actual result depends on the physical state the force is being applied to.

If I wear insulating gloves, then nothing happens.

Every physical state depends entirely on Natural Law, never the reverse. In other words it is Natural Law that creates or allows a given state.

A familiar example of Natural Law creating a physical state is water finding it's own level. If a Dam bursts its containment, the water travels until it reaches equilibrium and no further. The events leading to the dam bursting are also dependent on Natural Law.


Seat Of The Pants Example Of Natural Law

Recently I decided to replace my workshop roller doors. One of the blokes quoting was an engaging fellow who showed more interest in my workshop than the doors.

Casting his eyes towards the machines and equipment, he inquired, politely, “wha'daya make in here”?

Not expecting to be talking about me I replied hesitantly “Pretty well much anything I want, the only restraint is time”.

“Got a close mate with a great workshop”, he informed me enthusiastically, “Makes guns. We love guns”.

He continued with his story when I raised my eyebrows. “ Me mate makes gun barrels, trigger mechanisms, bolt actions, chambers, wooden stocks, everything. Need a license to make the barrels, which he's got”.

Repeating my earlier time restrain comment I confided that I too would like to make a gun. But only for target shooting. Killing anything is totally off my radar.
“Yeah, yeah”, he agreed, “Us two also, we belong ta gun clubs with shootin' ranges”.

My new friend was warming to his subject. Ecstatic to have a listening ear.

“We make bullets too. And shell cases. Gets technical though. Havta know whatcha doin'. Otherwise it don't work like ya want. Can get dangerous as well”.

In vivid detail he described how they cast lead projectiles in specific shapes and weights. Sometimes hand finishing the final projectile form for smooth bore barrels. 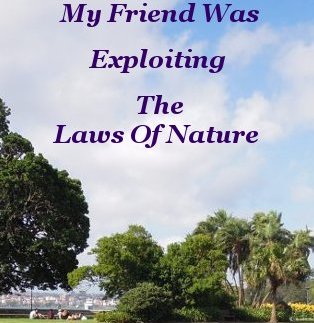 The type of shell case and primer used, and the exacting amounts of gun powder used depending on the distance to the target, were critical considerations.

He told me about the time allowed - during competitive events -  to fire a certain number of bullets, and other considerations such as whether the gun was hand held or support was permitted to help control recoil when the gun was fired.

Temperature rise of the gun barrel under rapid fire was critical to the time allowed. As was whether the gun was used indoors or outdoors.

He elaborated further on the demands of outdoor shooting. How they used fluttering flags to indicate wind direction and intensity.

“The intention is to place every bullet in the hole made by the first shot” He told me, his eyes twinkling. “We've come close but no one has done it yet, we're working on bein' the first”

My new friend was exploiting the Laws of Nature that permitted he and his buddy to build guns and bullets that, combined with their gun manipulating skills, would lead to what they desired.

In this instant, repeatedly hitting bulls-eyes and showcasing their expertise to their peers.

This is an innocent low tech example of Natural Law to achieve a desired end.

My gun loving friend and his buddy had associated cause and effect with the knowledge that definite physical states produce reliably definite results and put this knowledge, in their case, to satisfying use.

Confidently secure in the Knowing that they are on the right path to achieve their anticipated results.

In this charming Ted Talk video, a young inventor, Nikolai Begg, ticks all the boxes in a compassionate demonstration of how to employ the Laws of Nature for beneficial use. Everything evolves, and this invention has the hallmark of a winner.

You may well sense a kindred spirit in Nikolai Begg, I most certainly do.

Nature impartially locks Her secrets away in the Storehouse of knowledge. This simply means that Her secrets are available to anyone who is prepared to pay the price She demands. Although generous in the extreme, Nature does not support free lunches.

You can exploit Natural Law in the same manner as did the Wright brothers  August Otto  Thomas Edison  Benjamin Franklin and every other clear thinking inventor before and after them.

This is the same crystal clear thinking you are capable of. Particularly within your area of specialized expertise, which only you define the limits of. 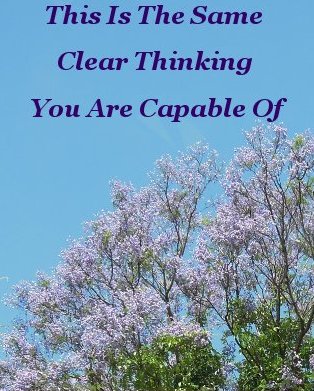 Whether Low or high tech - the bottom line of achieving desired results is:

When we gain the confidence to partner with Nature and take advantage of all she offers, we should be critically aware of one proviso.

Contrary to an all too common misconception amongst we Humans, Nature does not interfere in the Affairs of Humanity. She merely provides Laws.

Spiritual Laws govern the consequences of our actions when we implement our intentions. And like the Physical Laws, are explicit.

When we are implementing our intentions we should need no reminder that . . .

Return To About Natural Law