The birth of rigorous thinking skills may have stemmed from the cool insight, following the observation that plants reproduce themselves automatically.

And the realization that by cultivation, these same plants could provide a dependable food supply.

Our earlier forebears would then have the option to abandon their nomadic lifestyle. Devoted, as it was, to the tedious search for sustenance.

In combination with the ambient environment which in all likelihood inspired them, these seeds will sprout, blossom, and bear fruit throughout the ages.

Fruit in the form of Ideas. Influenced by each successive generation and environment, until they reach the present. Where we, and our environment, are responsible for their future direction.

Whilst Human groups were no doubt inundated with seriously daunting problems, generated by settlement in large numbers, as difficult and arduous they must have been, the evidence suggests the visionary members knuckled down and set their minds to work on solutions.

Though these solutions may seem primitive to us now, they were certainly clever for the time. And forerunners of technology and society as we know it today.

During the estimated eight thousand years since the advent of farming and agriculture, to the birth of Christ, Homo Sapiens mind was given a good old workout, putting Human intelligence through it's paces.

Evidence is scant, But it appears it would not be till near the final quarter of this period that Homo Sapiens focused attention inwards, to the source of their new found power. The Mind.

What ever the original stimulus that motivated we Humans to think was, it unleashed a veritable flood of thought. Good, bad, and indifferent, placing Human intelligence permanently center stage.

This Website is concerned mainly with "Good" thought. For conclusions that will become apparent to a true thinker at some stage of their thinking.

As with accurately dating Human evolution, it is not yet possible to  definitely pin point times and dates on many early inventions and, or discoveries.

We are regularly uncovering new evidence that changes either the time of an invention, or the inventor. But a reasonably close approximation  is adequate for our purposes here.

Prodigious results were produced by this period's thinkers.

Accomplishments made all the more impressive by their comparatively few resources to build upon.

Following is a taste of these thinkers major achievements. As best as I can determine, chronologically.

That ubiquitous symbol of technical progress, the wheel, was invented. 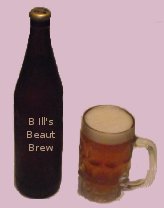 Water was directed via plumbing. Grain milled for flour. Money was circulating.

Beer was brewed. This very important beverage was possibly instrumental in helping to maintain health by providing clean liquid for drinking in the face of rampant communal water pollution.

And it is still humbly and gladly providing its thirst quenching properties today. Long live beer!!

Rivers and Seas were harnessed, first with sailing boats, followed by ships.
The mastering of the oceans came first with the Chinese, (and how) but it was the Europeans who went on to explore, colonize and dominate the planet.

Mathematics came into productive play approximately four thousand years ago. Attaining the status of a discipline roughly fourteen hundred years later, around 600BC. 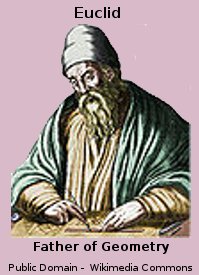 The zero was discovered. Attributed to the Babylonians in Mesopotamia (part of modern day Iraq), in the third century BC. During the lifetime of Euclid, whose exact date of birth and death doesn't appear to be certain.

Euclid was flat chat at the time earning his title as Father of Geometry. His treatise, Elements, consisting of thirteen books, has been influential in mathematics to the present day.

Euclid knew not of the zero, and Alexandria, where he lived, along with the rest of Arabia, would not learn of it until near the end of the tenth century AD.

The first primitive agricultural plow, made from wood, preceding the zero by about one hundred years, compliments and aids farming. Writing was practiced on many types of material. Papyrus, pottery, bark, and probably anything else that would accept a mark.

Forerunners of concrete were in use.

Heavy loads could be lifted by crane and moved by wheelbarrow.

Wootz Steel, first known tool steel, given of a fine crystalline structure still very much admired today, was put to use to make weapons. Humanities dark side was emerging.

Weapons are the fruit of fear and ignorance. A lesson we have yet to learn.

The crank was lending its not inconsiderable applications to engineers and even more so with the addition of a connecting rod to the crank several years after the crank's initial discovery.

The gearwheel, pulley, lever, tapered wedge, and screw thread were all discovered.

No doubt with considerable help engendered by understanding Euclidean Geometry.

Tools were setting the scene, and stimulating minds for an exponential wave of technological growth. We have yet to reach the zenith of this growth. If indeed a technological zenith exists.


Human Intelligence And A Great Mind

To conclude this glimpse of our earliest thinking, let's take a glimpse at an early thinker. 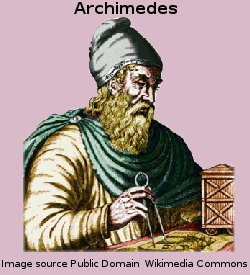 Archimedes of Syracuse, a younger contemporary of Euclid, brilliant mathematician, mechanical genius, and author of The Sand Reckoner, is a good example of a great mind at work.

His efforts contributed much to our modern understanding of Geometry.

"Give me a firm place to stand" boasted Archimedes, with lever in hand, “And I will move the earth”.

With this bold, confident statement, Archimedes informs us how well he understood the functioning and potential of the lever.

He went on to prove his comprehensive understanding of leverage. Giving a vivid demonstration of its power by using compound pulleys to haul a ship out of the water single handed.
Although he didn't invent this tool, Archimedes invented stuff every bit as practical.

Apart from discovering Buoyancy, among other things, this great mind invented the Archimedes Screw. 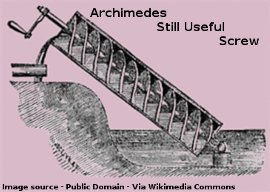 When his screw was installed in an open ended cylinder, then laid at an angle within a water source and rotated, it would raise water to the cylinder top and beyond.

This screw pump principle still has many practical applications today. You may even find it to be present in the lubrication system of your motor vehicle engine.

If screwed into the ground to serve as an anchor, a modern Bulldozer would be challenged pulling it out.

Next - Not all Is Rosy