Human intelligence is making it's presence felt. Early Homo Sapiens determinedly puts it to the test. 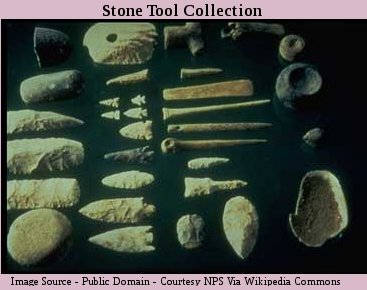 Homo Sapiens lived in primitive shelters with primitive tools and primitive art for more than one hundred thousand years.

After this time a new wave of creativity engulfed Humanity.

Tools were refined and made to serve a more specialized purpose, such as a spear head or barbed harpoon point, as opposed to being multi purpose, like the Hand Axe.

These tools could be construed as weapons, but we will extend our early forebears the benefit of the doubt and say they were invented for hunting.

This period of mind expansion continued to its zenith towards the end of the last ice age, culminating in complex hunting tools such as the shoulder spear thrower, a catapult type instrument.

Following the demise of Homo Neanderthalensis, Homo Sapiens found they had the world almost to themselves.

After the ending of the ice age, controversially, ten to twenty thousand years ago, the stone age was being seen off by the settlement of Humans into communities. Following the adoption of agriculture in the ancient Near East, and China. Animal farming was not far behind.

From these two active influences agriculture and farming spread to Europe, first slowly, then rapidly.

Cities and Culture followed as communities grew and expanded. Once again with Asia and the ancient Near East leading, and Europe following.

Several thousand years after the adoption of agriculture, the advent of metal smelting, first with copper and then tin, led to the Bronze Age when these two metals were eventually combined to form an alloy.

Several thousand years passed by from the discovery of Copper and Tin, to the realisation that these two elements could be combined to form a super useful third metal.

The Iron Age followed, some two thousand years after the beginning of the  Bronze Age. The earliest artifactual evidence apparently dating to around 2500 BC. (Before Christ)

Depletion of forest is a high price to pay

To smelt and refine iron ore effectively, consistently high temperatures are required. Necessity being the mother of invention, early Chinese innovators contrived a bellows operated blast furnace and achieved these higher temperatures some hundreds of years before their European counterparts.

The price they paid for this invention, though, was very high indeed.

Blast furnaces were powered by charcoal. Charcoal was got by the burning of wood, contributing significantly to the depletion of forests. The severe consequences of which the Chinese Nation is still suffering today.

In the face of scarcity and high prices of metallurgical coal to produce coke, charcoal is still used in some modern steel making plants. But in a much more economical manner and usually from managed forests.

An Age is merely a reference to any major influence upon societies at large. Ages can run concurrently and overlap. Although specific practices can be attributed to the dominant use of a material or procedure and thus locate its time-frame in history.

We are living in the Electronic, Space and Communication ages, to identify just three. But we also make much use of Bronze and Iron. Indeed, we still use Stone.

But, hopefully, for not too many tools.

Whether Humanities application of intelligence is good or bad is a point in need of much serious attention. 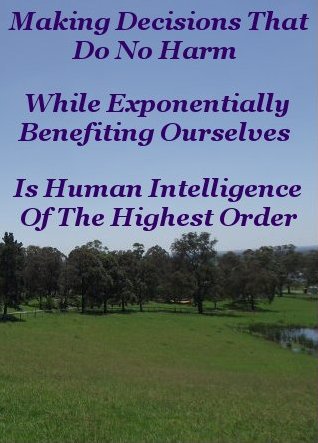 Making decisions that do no harm to the environment that supports us, to each other, or to our fellow travelers on this Planet, while exponentially benefiting ourselves, is applied Human intelligence of the highest order.

The Thinking Ability that enables such decisions is almost as rare as hen's teeth.

Ironically, this rare, quality thinking, is readily available to each and every one of us. Via the Natural Laws of Personal Development.

The following twenty or so pages are devoted to providing a glimpse into the Mindset of some of the most influential thinkers to have passed this way.

Thinking men and women, who, against almost overwhelming odds have broken through the blackness of ignorance and subjugation, into the luminance of knowledge and freedom.

It is fascinating, and, I believe, essential to keep uppermost in one's mind, the perception that this rare quality thinking is readily available to you and I as we go about observing how our Forebears employed their Human Intelligence, aka mind-power, on the following pages.

As we go about studying and assimilating these switched on mindsets, we can develop and refine our own thinking styles that emulate the best minds so far. And in so doing, make wise, equitable decisions that eliminate all harm and maximize good.

Next - A Taste For Thinking