In the Technical domain, Human intelligence can take a well deserved bow. However, there is an equally important and urgent field to master. That field being . . .

The disciplines of Human Intelligence, Behavior, and Conduct. This website is focused on that combination. A Humanity-wide Understanding of the Metaphysical Forces of Nature will render evil redundant. Not ambition - merely evil.

The invention of the Telephone by Alexander Graham Bell was properly the latest material development in a field that will come to envelop the Planet. 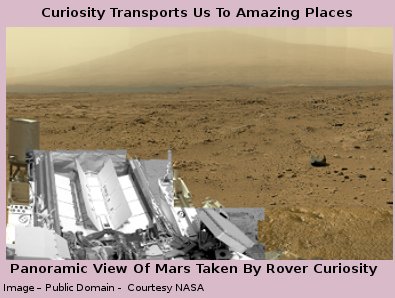 One more development that helps to vindicate Pierre Teilhard de Chardin's perception of his Noosphere. And adding cogent evidence for the power of intuition.

A power available to every Human mind on the Planet. At the behest of it's owner.

It is my belief that the affinity between electricity and the Human mind, via our brain, is significant.

This relationship between Electricity, Intelligence, Intuition and Knowledge will become apparent when we adopt a universal code of working together in the search for Truth.

Human Intelligence is a train traveling to a glorious future. Ever picking up speed. A train of knowledge we can all be passengers on and help steer in the direction of that Truth.

We can exert this influence by our behavior and conduct. And by accepting nothing less than Truth, no matter how long it takes to find.

The one and only thing that can derail this fast train of truthful knowledge is evil. When we comprehend Nature and Her Laws, we learn that evil is a destructive force of choice.

Just a few of the plethora of useful things produced by fertile minds. Things wrought from Natural phenomena we cannot see, but which belong to the four Fundamental Forces of Nature.

Forces that Science has so far definitely identified. And well worth our while to devoting a portion of our thinking to.

These forces are at the root of pretty much everything Humanity has so far built to create the world modern Homo Sapiens lives in. If these forces did not exist, the Universe, and us, would probably not exist either.

These phenomena apply across the board. Covering every aspect of Human activity. That sense of curiosity all intelligent Humans possess, has been well and truly whetted, and remains ever more so in the quest of discovery.

Once a thing is proven to be true, a multitude of aware minds turn their attention to it, adopting and copying.

A few deeper minds advance a discovery or invention by going to the next level. Continuously developing the original, creating new products inspired by the earlier, generating an ever expanding ripple. Broadening  into a swell. Then a flood.

This same deeper thinking, reflective, breakthrough mindset has application to all Human endeavor. Including relationships and sport.

Dedicated Sports Folk have comprehended, adopted, and implemented this mindset much more readily and widely than other disciplines. Or indeed the population at large. We can learn much from these wise folk.

Natural Law and the Human Mind has my constant attention. Maybe I am sticking my neck out here, but I would not be surprised to learn that sometime in the future the developed Human mind exerts itself as the fifth fundamental force. But . . .

I am not holding my breath.

If we are to see this quite possible phenomenon become reality, it has been my long considered belief that Humans would have to lose their primitive barbarianism and live harmoniously together on a high, unwavering plane of Personal Development, aka Mind Expansion.

Humans have almost completely mastered Classical Physics and we have a working knowledge of Quantum Mechanics sufficient enough to produce the high tech world we live in.

We are making rapid strides in this barely explored discipline that offers us salvation from our current self imposed material problems.

If, paradoxically, we are willingly cooperative, and adequately sagacious, to achieve the level of Harmony necessary, in order to successfully apply our collective Human intelligence, erudite and intuitive, to resolve these cold, smothering material problems.

Repairing the physical environment that provides our subsistence would be seen as a priority.

Homo Sapiens has performed admirably in the ceaseless quest for technical knowledge. We have built on each other's contribution and passed it all down from generation to generation. Improving and developing every aspect imaginable. 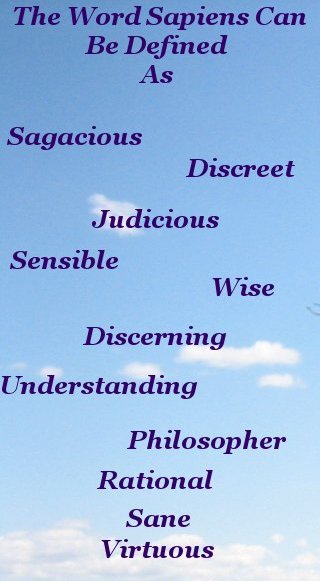 Many of these discoveries however, were accompanied by horrendous squabbling and bickering. A habit still practiced today.

Squabbling and bickering also applies to Politics, Business, Religion, Relationships – appearing to be the default condition of many Humans.

This condition can be attributed to a lack of not technical knowledge, but a lack of understanding of how our mind functions.

A lack of understanding does not sit at all well with the Sapiens description we have bestowed upon ourselves.

But the evidence indicates clearly that collectively, we are not living up to these ideals. On an interactive basis we create as many, or more, problems, as we solve.

It is time for a new way to approach and execute the amazing Societies Humanity has built despite seemingly infinite ignorant opposition from the non thinking members of our own species.

This will happen when we dare to begin to believe we can demand our Politics jettison the odious patterns of irrational behavior that inevitably lead to suffering for all involved. Including the protagonists.


You Will Make It Your Own

Personal Development is the means by which Humanity can address and resolve the multitude of relationship and other problems we face.

This philosophy has many contributors over millennium who used the power of their minds, and their Human intelligence to better the lot of our species.

You and I, by practicing personal development, can continue to build on the efforts of all those great minds who preceded us.

You might, if you are in the early stages of Personal Development, find the subject a touch disparate. But as you study, understand and progress, you will come to see it as a rock solid Entity. A distinct and mighty Authority. In due course you will understand intuitively and effortlessly.

It will become second nature. You will practice it as easily as you breathe.

You will make it your own. You will liberate your Mind Power. Once you do, no-one can deprive you of it.

And only you know if this is possible and probable - - -

You may create something, on purpose, that will have the same impact on Humanity as did Habilis's Axe. But sooner . . .

To achieve the desirable world that every sane Human Being hankers after, Humanity needs to make the same solid progress in the Spiritual realm as we have made in the technical arena. 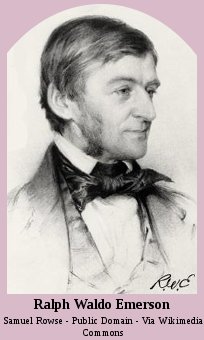 Nature demands a price be paid for benefits received in the physical world.

That price is the understanding of Her Laws.

This is no less true in the spiritual world, we must pay a price for benefits received.

Developing ourselves to reach higher planes of thinking, then resolutely practicing that thinking is paying the price Nature demands to deliver Harmony.

Higher plane thinking is the first step on the road to physical and spiritual harmony here on Earth.

It is also the means to achieving Teilhard de Chardin's Omega Point.

The Human Brain possesses the intellectual capacity to reach the point where we are the fifth fundamental force, and beyond. Yet we are stuck in a vicious circle, seemingly unable to break free.

The healthy functioning of our Planet, the only one we have, (to date) along with it's inhabitants, depend on all of us making progress towards a goal of unity and solving problems, together, along the way.

More than a century ago my all round hero, Ralph Waldo Emerson, enquired with astute prescience:

“Who can set bounds to the possibilities of man"?

It's time has arrived. The sky is blue. Let's get Enthusiastic about Personal Development, and make it Rock! Human Intelligence can make it happen.