Human Intelligence Must Comply With Nature
Before She Reveals Her Secrets

Demonstrating his acute understanding of Human intelligence, Thinker Nicolaus August Otto appears to be the first inventor to depart from basing Gas Engine design on Steam Engine parameters. Steam engines belong to the field of Thermodynamics, but that is where the relationship with the Internal Combustion Engine ends.

Nicolaus Otto appreciated that here was a new technology that demanded different principles be followed. That is, different Laws of Nature needed to be implemented.

Comprehending, as Beau de Rochas had so clearly suggested, that all the elements of successful combustion take place in the one cylinder. Including compression of the gases before ignition. A major point of misconception between these spirited pioneers.

Theory to physical reality is no mean feat. This, every bit as much as conceiving the original theory, entails that most important aspect of all.

That aspect is Rigorous Thought. 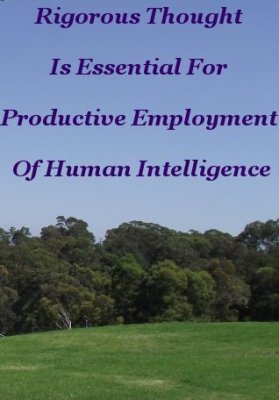 In the fourteen years that ensued following the dictates of Beau de Rochas, August Otto appears to be the only one who grasped that Beau de Rochas's formula was the correct assembly of Natural Laws that permitted the internal combustion process to work in an economical, controllable manner that produced power.

And lent itself to development and refinement.

It has been suggested that August Otto did not understand the crucial relationship between compression of the gases before ignition, and fuel economy. (power output is also influenced by compression)

Otto indicated in an earlier patent for improvements to his older free piston engine, that he believed economy and power hinged on controlled rapid expansion of the gases. This perhaps this can be interpreted to mean he was including compression in his perceptions. In other words, he did understand.

A Certain Price Must Be Paid

While Otto incorporates all the principles and suggestions of Beau de Rochas in his new engine, in his patent he emphasizes importance on his concept of “Stratification,” or the provision of gas and air injected into the cylinder in discrete, controllable layers. 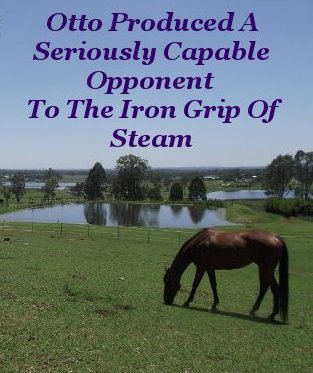 He describes in detail a method whereby the combustion process can be controlled by affecting the rate of burn of these layers.

Otto was right with his concept of gradual and smooth, but rapid combustion.

He was though, mistaken with his method of execution. That is no reflection on his capabilities. He needed more time. Brilliant minds are still working on that concept today.

Nature demands a certain price be paid by Human intelligence before parting with Her secrets.

Otto proved the Beau de Rochas hypothesis in practice, and could justifiably call it the Otto cycle. Both these men have earned recognition for an outstanding contribution to Humanities material progress.

Once agian Otto trumped his industry fellows and led the market, producing a seriously capable opponent to the iron grip of Steam.

Unlike most other makers of Internal Combustion Engines, whose products were imaginatively used in attempts to power vehicles of all description, Otto and Langen concentrated on stationary power-plants. The demand for which was so great they could not keep up with.

Nicolaus Otto's lucid understanding of Human intelligence produced a slew of opportunities for other great minds. 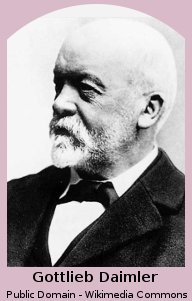 Former employees of Otto, Gottlieb Daimler, (1834-1900) an engineer and Otto's technical director, and Wilhelm Maybach, (1846-1929) also an engineer, with whom Daimler created a company, built a compact version of Otto's engine and developed it to suit a vehicle.

This entailed the use of Gasoline as a fuel, which needed to be vaporised, requiring the invention of the Carburettor. Coal gas was the major fuel source for engines of the period.

Rather inconvenient for mobile applications.

Petroleum based products had been around for some time and some engines did indeed use gasoline. But this fuel too, presented an unsolved serious drawback.

Gasoline required a practical way to atomize it from a liquid to a vapor like spray and mix it with air. 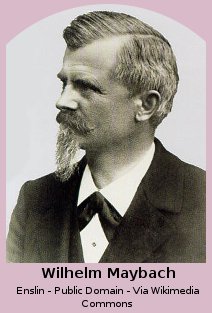 But it was Wilhelm Maybach's Float Feed, Spray Nozzle carburettor which delivered a constant, controllable supply of correctly mixed atomised fuel that was the most advanced.

Maybach's device proved to be suitable for any internal combustion engine and became the basis for the Industry Standard.

Maybach had been working on atomization for some time. It was he and Daimler's innovative pioneering work on practical atomization, and the Otto cycle engine, in compact form, that laid the foundations for the Automotive Industry.

Both Otto and Daimler had the foresight to fit an engine to a bicycle. Creating the forerunner of the modern Motorcycle.

Human intelligence is on the move and will shortly be mobile in the physical as well as the spiritual dimension.

Next - One More Peek