The First Glimmer of Human Intelligence

Human Intelligence appears to be first displayed in any meaningful way a tad more than two million years ago. When Homo Habilis rocked up.

Homo Habilis translates from Latin to Handy Man. He was named so by his discoverers, the renowned husband and wife Palaeontologist team, Louis and Mary Leakey, because he proved to be adept at toolmaking. 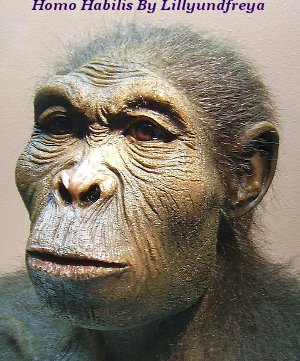 Tool making is a trait shared by more than a few of his modern descendants.

Nonetheless, Handy Man may well have been Handy Woman.

The term Man, as in Mankind, can be used to collectively denote both males and females of our species.

In light of the perception in some quarters of Society that males are somehow superior to females, my preference is to lean towards the more congenial description of Humankind.

As Human Beings we are all individuals, all equal.

Thinking women from all cultures, all over the world, are proving this point when they achieve freedom from the narrow confines of males possessing primitive, undeveloped, dominating mindsets and join in concert with their enlightened Brothers who see them as their integral other half.

Practicing Personal Development expedites and hastens progress towards this most desirable state of freedom.

This slower period in Humanities evolution may well have been, figuratively speaking, Nature's crucible, wherein She forged and sculpted our brains in the final preparation to process thought. Building on hundreds of millions of years worth of mechanical development.

Nature was preparing to launch Her greatest vision, Human Intelligence. I am very happy that She did.

Homo Habilis, estimated to have been around five feet tall, weighing perhaps one hundred pounds, and sporting a brain volume of 510 - 660 cubic centimeters, as determined using the Endocast method, a manner of measuring internal volumes.

Apart from Homo Floresiensis, who is not yet proven to definitely belong to the Hominidae Family, Habilis's brain volume is the smallest so far to be recorded.

Brain size not withstanding, Homo Habilis was, ostensibly, the first Human inventor. Habilis exhibited the initial glimmer of Human Intelligence as we recognize it today.

Although stone tools have been discovered dating back for more than two and a half million years, and because the relationship between the various species of the Hominidae Family, is still indistinct and incomplete, Habilis is the first Human to be credited with purposely designing and making a tool. 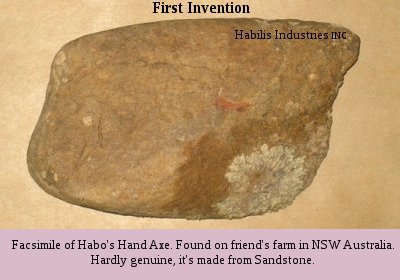 Habilis's invention, the stone Hand Axe, set the scene for a technological future.

This invention has all the hallmarks of a consciously creative act. Habo had stumbled upon Creative Thought and brought Human Intelligence into play.

Surprisingly, it would be the better part of two million years before it was superseded.

If this is true, and the evidence to hand suggests it is, this point is of much interest to us. 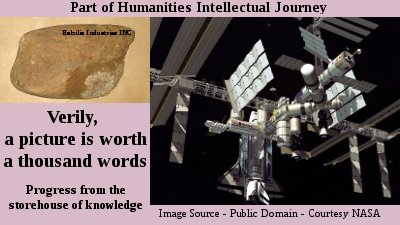 Homo Habilis and their descendants spent the better part of two million years failing to capitalize on that first burst of creative thought. Content to merely share the limited knowledge they had obtained.

Habilis appeared to be happy to use the Hand Axe as a multi-purpose tool, but not developing it. Or inventing much else. Unconscious of the enormous Storehouse Of Knowledge at their behest.

Knowledge provided by the Infinite Intelligence of the Universe.

Even today this is far from well known. Let alone understood.

Incidentally, this is the very same Storehouse of Knowledge available to we modern day Humans.

Habilis's desires were simple. The demands that they had placed on Nature required little thought and were easily met. And apparently they didn't have a clue where the power that allowed them to devise and use their, for the time, marvelous invention, came from.

This seemingly lack of conscious awareness was not entirely our forebears fault. Paradoxically, we need to have knowledge to gain knowledge.

This lack of recognition has persisted through the ages to the present day, where it still holds sway.

Fire was discovered and mastered around the half-way or one million year mark. 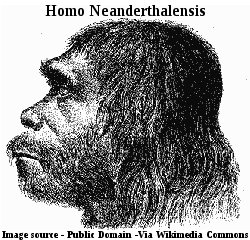 Homo Neanderthalensis, our most recent relative, demonstrated more awareness of their Human Intellect, than did Homo Habilis.

Over a period of around 400,000 years they made slow, spasmodic intellectual progress. But progress all the same.

Major achievements of our cousin, Homo Neanderthalensis, as noted below, were comparable with we Homo Sapiens.

Stone, flint, bone and wood tools were experimented with and in the latter period, co-existing with Sapiens, the Neanderthals built shelters, indulged in primitive art, clothed themselves and buried their dead.

Then somewhere around thirty thousand years ago, for an as yet unknown reason, they too, became extinct.

Had Homo Neanderthalensis survived, they could have proven themselves to be far superior masters of Human Intelligence than we are. As we will discover, mastering intelligence is a learnable skill.