Human intelligence is involved in an intellectual tug of war. The winner will decide Humanities future technological direction. Sound familiar? 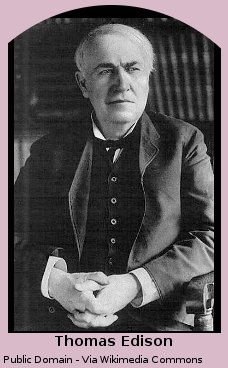 Thomas Alva Edison, (1847-1931) who spent several of his early years as one of the best telegraph operators around, was the major player in the industrialization, and domestic supply of (DC) Direct Current. Placing total faith in his belief that DC was the way to go.

At that time, Direct Current was deemed safe. Easy to handle and work with. Could be stored in a battery as a backup supply, and readily employed when electroplating.

Benefits not then available with DC's arch rival (AC) Alternating Current. Which Edison viewed as dangerous.

While controversy remains over his opposition to alternating current, according to his biography authored by Frank Lewis Dyer and Thomas Commerford Martin, Edison was not totally opposed to AC.

He recognized the definite advantages alternating current possessed over long distances. Freely acknowledging that it should be used for long distant transmission. Then once it arrived at its destination, used to operate direct current generators, and DC used for consumer supply.

He was in the business of supplying safe, economical energy for lighting in densely populated areas. In competition to lighting by Coal Gas.

There was nothing intrinsically defective with Edison's supply system. He had designed and built an admirably efficient and complete Instrumentality for lighting, worthy of the highest praise.

The then technical drawbacks of Direct Current though, including those of distribution, difficulty of voltage transformation, and the application to industrial motors, were being increasingly severely tested.

A latter day Da Vinci with a well equipped workshop.

Tesla possessed a First Order intuitive mind. Edison was likewise endowed. He worked for a short time for Edison. However, unfortunately for the world, their difference of opinion regarding whether AC or DC current was the superior, drove them apart. 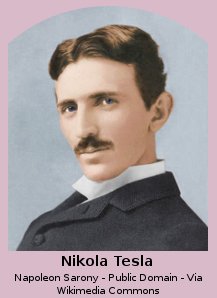 During the second half of the 1880s Tesla was awarded a number of  patents for a “System of Electrical Power Transmission,” based on poly-phase (more than one phase) circuitry which was so revolutionary and original that his patents went unchallenged.

This intuitive aspect of our Human intelligence has my total attention.

These patents complimented one he had been awarded earlier in the decade for a brush-less AC induction motor.

Following a visionary course of action, George Westinghouse, (below) persuaded Nikola Tesla to transfer these patents to Westinghouse's company and work for him as a consultant.

All that Westinghouse required now, was a Transformer to control voltage. For this too, he purchased a patent.
Of course, Tesla applied his mind to, and improved the design of this device.

Armed with these patents and Tesla in his employ, Westinghouse went into battle with Edison. For the supply of Electricity. AC versus DC.

The winner of this battle would reform the foundations of industry, and put the industrial steam engine on it's last legs. Worldwide.

American, George Westinghouse, (1846-1914) Engineer, Inventor, and Industrialist, was a brilliant mind who had a direction changing, world-wide impact on the Railroad. 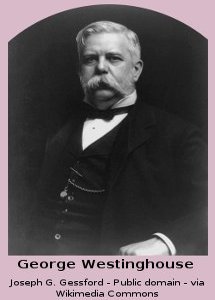 With his invention of a compressed air braking system that permitted just one man to control the braking of a complete train. Paradoxically allowing the train to travel faster. With increased safely.

Before Westinghouse's truly innovative invention, train braking was achieved by applying the brakes manually on individual carriages. By individual brake operators, under the directions of the train driver.

Braking in this crude manner would be no mean feat of coordination under any circumstances. Let alone an emergency situation.

With faster speeds came the necessity for coordination of the then, too, manual signaling system. A system fraught with Human error caused by misinterpretation.

Westinghouse, using his ever agile mind, addressed this shortcoming in the same efficient, effective manner. To this end he invented and implemented an electro-pneumatic, almost foolproof, system of signals to direct train coordination and timetables.

This was the mind Thomas Edison was up against.

After a ten year strategic engagement with Westinghouse, Edison lost out to a more practical (for the time) system. 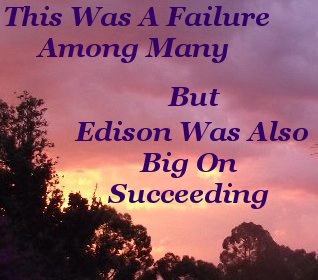 It would be interesting to know the outcome if the modern day Rectifier and Inverter had been at Edison's disposal, and DC had retained it's entrenched status.

Perhaps today we would all be driving Electric Cars, and using Solar Energy drawn from a super efficient storage facility.

How good would that be for our suffering environment?

The power stations and related infrastructure Edison had put in place was no small business. His electricity supply system was the standard for the United States. With interests in other countries.

His company, Edison Electric, was the antecedent of one of the presently largest companies in the world, General Electric.

This was one failure among many. But Edison was also big on succeeding. He understood just how Human intelligence functions.

Perhaps his best inspiration was to form an Industrial Park . . .

Thomas Edison's Menlo Industrial Park, the first Research and Development park ever, could also claim the title for the first Industrial Mastermind.

A Mastermind has collaboration as it's foundation.

Menlo Industrial Park, “in a six year burst of astonishing creativity” according to the Edison Memorial Tower Corporation, delivered around four hundred inventions.

An outstanding application of Human intelligence