A Closer Look At
Human Intelligence In Action

Human intelligence is freely available to be drawn upon by each and every individual. but it's power can be dramatically increased when two or more minds blend in total harmony. 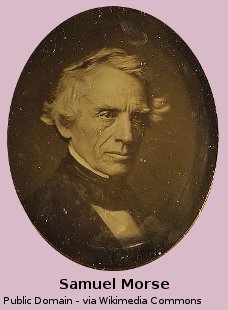 Samuel Morse, (1791-1872) a most accomplished Artist, well known and accepted in society, for both his artistic ability, and engaging personality, was the second to commercialize. And eventually dominate the Telegraphic Market.

Morse possessed a sure, innate desire to learn. Demonstrating this by qualifying for entry to Yale University at the early age of fourteen.

Here he met friendly, influential professors who took an interest in him as he pursued his studies of Natural Philosophy, Chemistry, Art, and Electricity with equal passion.

Now in his late thirties, following a three year stint in Europe, which proved to be artistically productive but financially barren, Morse recrossed the North Atlantic Ocean to New York.

It was apparently on this voyage that he had his first serious musings on his telegraph. He believed that not only could a signal be sent over any distance, but that a permanent message could also be transcribed.

After landing in New York, and settling down, Morse was fully occupied for the next several years. Much of it in isolation, figuring out how to build his machine and make it work. Using his lodgings, a single room, as a workshop and art studio. Eking out a living selling his paintings.

He was recruited by the then infant New York University for the position of Professor of Literature and Arts, where he met Leonard Gale and Alfred Vail (1807 -1859).

An inventor's dream team, these two men provided Samuel Morse and his Telegraph with much needed support. Moral, technical, and financial.

Vail, a deeply moral man whose passionate dream to be a Presbyterian Minister was shattered by ill health, possessed a keen mechanical mind and the ability to physically reproduce his ideas. Expressing a willingness to access his Human intelligence. 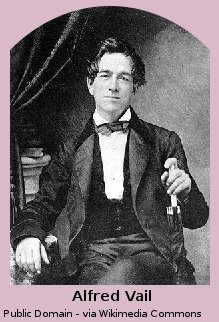 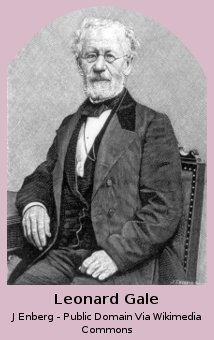 Gale was a Professor of Chemistry and up to date with the state of the art in Electricity. Morse showed Gale his working device he had built from crude parts.

Displaying an intense interest in Morse's set-up, Gale discussed it's shortcomings. Such as weak current supply and inability to transmit a signal over any great distance.

Morse's solution to this was to use relays at suitable intervals along a given route, expressing surprise when Gale informed him that others had come to the same conclusion.

Samuel Morse was quite unaware that anyone else had conceived the idea of the telegraph.

Gale broadened Morse's knowledge of what other parties were doing in telegraphy, what advances had been made in electricity, and what new hardware was available.

He learnt about the work of Charles Wheatstone and others, about Joseph Henry and his electro-magnet with it's finely wound coil, and about the Daniell Cell that promised superior current supply.

With valuable new knowledge in his possession, Morse approached his telegraph project reinvigorated.

In a serendipitous turn of events, Alfred Vail, after witnessing a prior demonstration of Morse's device, purposely visited him, uninvited, at the university where Morse and Gale worked. And walked smack bang into another demo, this time over a much longer distance.

Profoundly impressed, comprehending the Laws of Nature that allowed this machine to work, and recognizing the enormous benefits it offered to the World, Vail inquired of Morse if he intended to pursue the device's potential over even longer distances.

Morse replied in the affirmative, but first he would need to find an investor to fund such a venture.


Reflection Is Intrinsic To human Intelligence

Returning home, Vail reflected on the possibilities the telegraph offered and whether indeed it could be made to work over long distances. 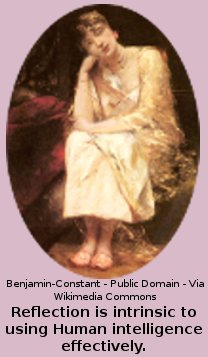 Deciding that the benefits to the World were worth the risk, he presented the proposition of forming a partnership between himself and Morse, to develop and commercialize a new Telegraphic System, to his Father.

Vail senior, an astute business man, saw the potential in funding his son's proposal and an agreement to form a Partnership was drawn up between Alfred Vail and Samuel Morse.

With Gale and Vail on board, progress advanced to a working system. Then a copper wire line including the essential relays, was constructed. From Baltimore to Washington DC. A distance at the time of somewhere between fifty and sixty kilometers.

Twelve years in the making, from conception to creation, Morse's baby was, like almost all jaw dropping undertakings, fraught with obstacles that invite the less determined to give up.

When one is determined to overcome obstacles, a genuine comprehension of our Human Intelligence proves invaluable.

In a mere ten years further, according to the National Museum of American History, more than 37,000 kilometers of telegraph line had been erected around the Country. 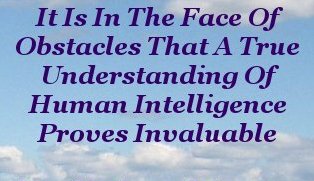 It needs to be mentioned, however, that while the idea of the recording telegraph belonged to Morse, it is fair to say it was Alfred Vail who was responsible for the development of the final working instrument.

This final instrument ironically did not incorporate Morse's method of recording. Instead, it implemented a means invented by Alfred Vail.

Vail was also responsible for the Morse Code of dots and dashes.