Great Minds Exercise Human Intelligence
To Know The How And Why

Applied Human intelligence moves beyond the  obvious, and takes it's initial gingerly tentative - and otherwise! - steps towards understanding the phenomenon of Electricity.

Employing both Intuition and Empiricism, great minds show determination to know the how and why.

Electricity, or to define this Natural Force more correctly, charged particles, is an integral element of the fabric of the universe. All matter is composed of subatomic particles, in a balanced state. 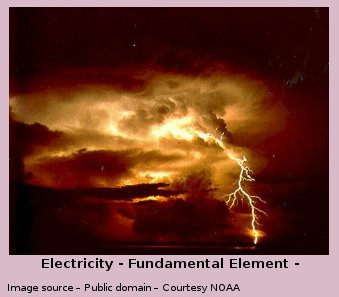 This to be indispensable phenomenon made it's quiet, humble, unobtrusive début into Humanities consciousness in the form of static.

Static was known to Thales, living in the sixth century BC, and one of the earliest Greek Philosophers. (think of early philosophers as scientists) Just as Steam Power was known in the first century AD to Greek inventor and mathematician Heron.

Proving the power inherent in steam, Heron's steam curio, the Aeolipile, may well have been the stimulus for the modern steam turbine.

Electricity, like steam, was slow to be understood. Here, we have a look at a few participants and highlights though time.

One thousand years after the observation of static electricity, Human intelligence became aware that there may be more to it, and it just may be useful.

Intuitive thinking on a grand scale had to take place before this conclusion of useful though. Electricity can be felt but not seen. Ways needed to be found to expose it for study.

A new Scientific Discipline was in the womb, so to speak.

William Gilbert, (1544-1603) author of 'De Magnete' the previously mentioned tome, played a crucial role in the birth of this discipline which affects every part of our modern lives, when he made the distinction between magnetism and electricity.

Other great minds stimulated and encouraged by the work of Gilbert added the power of their curiosity and thoughts. 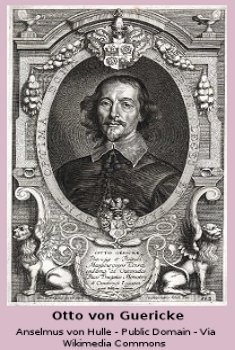 Proving that it exists, and exposing the potential it offers to extract power from the atmosphere to perform work.

Work as shown in the Newcomen Steam Engine, and the Atmospheric Gas Engine.

In the early 1660s he invented a useful machine that produced static charges.

This machine and it's derivatives would prove to be of immense value as an experimental aid to not only his eager contemporaries, but to many others, in the years to follow.

Stephen Gray, (1666-1736) who remains an obscure figure, made several essential contributions to understanding the nature of electricity.

Performing experiments in his living quarters he discovered that electricity flows, just like water, but not effected by gravity, requires a conductor, and needs insulating.

At this initial stage of their comprehension, those involved in investigation and research believed they were dealing with one or more fluids. The flow of water is still used as an analogy to help us grasp the mysterious concept of electricity. 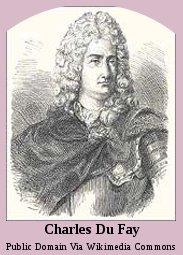 Charles Francois de Cisternay Du Fay, (1698-1793) a Chemist, who, you won't be surprised to learn, was French, differentiated between the fluids.

These two charges proved to be opposites and attracted each other. Just as opposite poles do in magnetism. Like charges repel.

Du Fay demonstrated that basically all solids except metals could hold an electric charge when rubbed. Most ferrous metals can hold a magnetic charge.

William Watson, (1715-1787) an English scientist and physician who later in life held the office of Vice President of the Royal Society, proffered that these two charges were part of the one flow. What today we refer to as Positive and Negative. Descriptive terms that William Watson and Benjamin Franklin coined independently.

Across the vast North Atlantic ocean, Benjamin Franklin, (1706-1790) had come to the same conclusion as his European peers. Electricity was but one of this Polymath's interests. 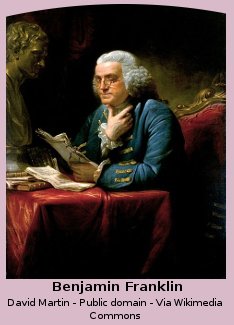 Replicating Electrical Phenomena such as sparks and flashes, reproduced in boyishly enthusiastic experiments by various participants in what must have been one of the most exciting games in town at the time, had already been well compared to naturally occurring lightning.

Franklin would have been aware of this fact when he conducted his well known lightning experiments with a key attached to a kite.

His intentions were to prove this to be true, and to control lightning so it could be put to use in the laboratory.

He succeeded with his first intention.

The second intention is still waiting for some bright spark to bring to fruition.

No apologies for the, as usual, unintended pun.

Imagine though, the benefits to Humanity if lightning could indeed be harnessed and stored for industrial and domestic use. There is every chance that this will eventually happen.

Benjamin Franklin was one of the first pioneers to prove that electricity was part of Nature. And, in common with all other energy, could not be destroyed, or created. But could only be changed from one state to another. Contributing to the consolidation of the Law of Conservation of Energy. 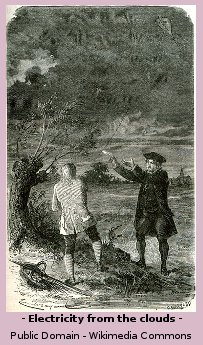 Franklin possessed a colossal intellect, his interests, and contributions to society, ranging widely.

Among this active man's contributions are bifocal glasses, the ubiquitous lightning rod, and the Franklin stove.

Amongst his many other achievements he was a founding Father of the US Constitution, and also a signatory to the Treaty that terminated the Revolutionary war with England.

Politically, Benjamin was a believer in, and promoter of, small government. Wisdom appears to be an innate trait in his very astute character. We can learn much from the manner he applied his colossal intelligence.

The quality I find most impressive, and attractive, was his advocacy of open source technology.

He foresaw that our selfish attitude to technology primarily for control and financial gain was, and would remain, counter productive to an equitable and safe world.

We are fortunate to have a few Benjamin Franklins in the business world today.

These dedicated folk are fighting a somewhat uphill battle against rampant greed. But as Personal Development spreads and capable men and women assume more and more positions of influence and authority, greed will be vanquished and the damage it inflicts, repaired.

Human Intelligence can and will prevail.