Embracing The Power Of Human Intelligence

Human Intelligence is making a gradual, but definite, impression on the minds of the relatively few who dared to embrace it's power. Thankfully, a snowball is beginning to roll and build as ever more minds awaken. We take further glimpses of great minds at work.

Well into the renaissance, that major advance in our ability to observe the heavens, the Telescope, a combination of spectacle lenses, patiently waited to be discovered for maybe two and a half centuries. 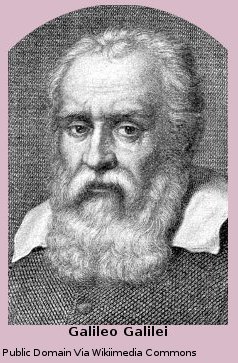 When it finally made it's appearance in the early 17th Century it was an instant hit.

Galileo Galilei, (1564-1642) an Italian born mathematician, inventor, and scientist is well known for his support of Nicolaus Copernicus.

And equally well known for his outspoken resistance to the mind crippling attitude and demands of those in power.

Galileo suffered the loss of his freedom for initially refusing to agree with their views. This did not deter him in his scientific endeavors to find truth.

Although he did not invent the telescope, this man, in common with all capable men and women, was not short of Human Intelligence and mind resources.

He wanted a more powerful scope than anything available, so he built one. On the technical side he is credited with being the first to point a telescope at the sky.

With this instrument Galileo vindicated his Copernican views, studied craters on our moon, and discovered four of Jupiter's moons. Jupiter has, to date, sixty seven moons. The four largest, which Galileo discovered, are referred to as Galilean Satellites.

Being as outspoken and candid as he was, can you imagine his response to the mind crippling hierarchy impeding his search for truth, if he had had the Hubble Telescope at his disposal to back up his observations?

Along with Astronomy, Galileo was also big on mechanics. Among his many diverse inventions and discoveries are the Thermometer, the Theory of the Motion of Falling Bodies, and the first Harmonic Oscillator, the Pendulum.

Christiaan Huygens, (1629-1695) who passed away on the blurry cusp of the Renaissance and Enlightenment, was a well connected Dutch physicist and mathematician. 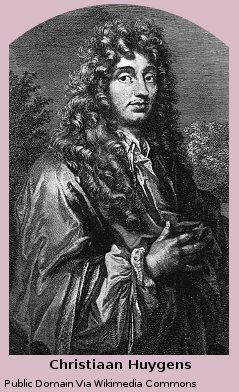 He was a thinker who contributed much to The discipline of Mechanics. Inventor of some note, he gave Humanity at large the most accurate clock when he applied the principle of oscillation to a timepiece using a pendulum.

Making the insightful breakthrough that for the purpose of timekeeping, the pendulum needed to follow a cycloidal arc.

A moving pendulum produces a regular beat while describing a circular arc, but does not maintain a perfectly equal swing, thus rendering it unsuitable for accurate timekeeping.

Huygens superb insight delivered a tool of immeasurable value to science, and to Humanity in general.

Receiving progressive development and improvement, the pendulum clock would remain the most accurate means of measuring time for the best part of three hundred years. Until the advent of the crystal oscillator in the late 1920s and the construction of the Atomic Clock in 1949.

Christiaan Huygens was a fellow of The Royal society.

The Royal Society - founded in the UK and sanctioned by King Charles the second, is a fellowship of elected peers from the scientific community in Commonwealth countries, and foreign members from around the world, who are at the cutting edge in all fields of science. 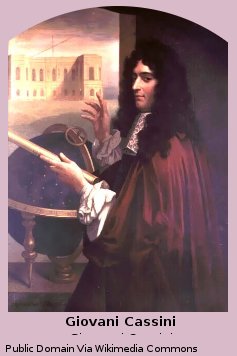 Italian Giovanni Cassini, (1625-1712) also a fellow of the Royal Society, as were many of the luminaries mentioned on this site, was a man of numerous talents. Engineer, mathematician, and tutor, among others.

He was also a dedicated observer of the heavens, who accurately calculated the distance from Earth to Mars. Laying the groundwork necessary to scale the solar system.

Cassini employed the parallax method and Human Intelligence to obtain his desired measurements.

The parallax method is error prone, even in the hands of a competent executer.

Giovanni Cassini was meticulous as well as competent and his painstaking efforts enabled an early picture of distances to celestial bodies. Laying the foundation for the phenomenally accurate ground and space based measuring instruments Astronomers have at their disposal today.

Danish Astronomer Olé Roemer, (1644-1710) Giovanni Cassini's one time assistant, produced the first credible calculation of the speed of light, based in part on Cassini's work. 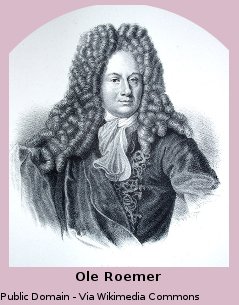 The other part was based on Roemer's mindful attitude, observant nature, and his ability to employ Human intelligence to think.

Roemer and Cassini disagreed, as did so many scientists at that time, about the speed of light.

Cassini was of the opinion that light was instantaneous. Which appears to have been the dominant view. Including that of Aristotle and Descartes.

Roemer, as did Isaac Newton, believed the speed of light was finite, and proved it so.

The actual speed, though, would remain in doubt for the next one hundred years. While other scientists came close, it would take the invention of another tool, the Interferometer, to measure the speed of light precisely. 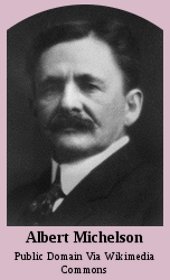 Albert Michelson, (1852-1931) born in the former kingdom of Prussia, his family emigrating to America when he was two years old, was an American naval officer, brilliant Physicist, Nobel Prize winner and talented inventor.

He invented the interferometer in the late nineteenth century and settled the speed of light argument for ever.

Michelson refined his invention over the next few years and obtained the most accurate measurement of the speed of light via optical means to date.

His device has inspired many other useful measuring instruments based on using interference to accurately measure the speed of light and other waves.

So useful in fact, that recently, using the principle of interference, multiple generations of Scientific and Engineering effort to pin down the elusive gravitational waves predicted by Albert Einstein and his Theory of Relativity, in the early stages of the twentieth century, were rewarded with the discovery of their existence.

Gravitational waves open a brand new way of observing the Universe. We can now study and observe the Universe by listening. As well as seeing via optical means, and electro-magnetic radiation.

This new ability to Listen into the Universe will enable Humans to discover phenomena that would otherwise remain out of reach of our conscious observation. 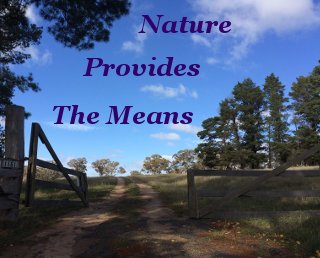 This new discovery of gravitational waves was made via an earthbound observatory.

Around the same time of this discovery, a space mission was launched that will conduct new experiments using a Laser beam Interferometer that has a sensitivity of one picometer, or one trillionth of a meter.

If these experiments work, that is, if gravitational motion is detected, then a space based observatory will be constructed to build on this most important milestone in the ongoing exploration of our Universe and Natural Law.

We are witnessing the birth of a brand new, heart-stirring, far reaching, Scientific Discipline. If funded adequately, this author has no doubt that these intellectually intrepid men and women will attain their desired goals.

There must be no doubt. Simple or complex, Nature will reveal her secrets when we apply our Human intelligence to Her satisfaction.

Next - Planes Of Thinking